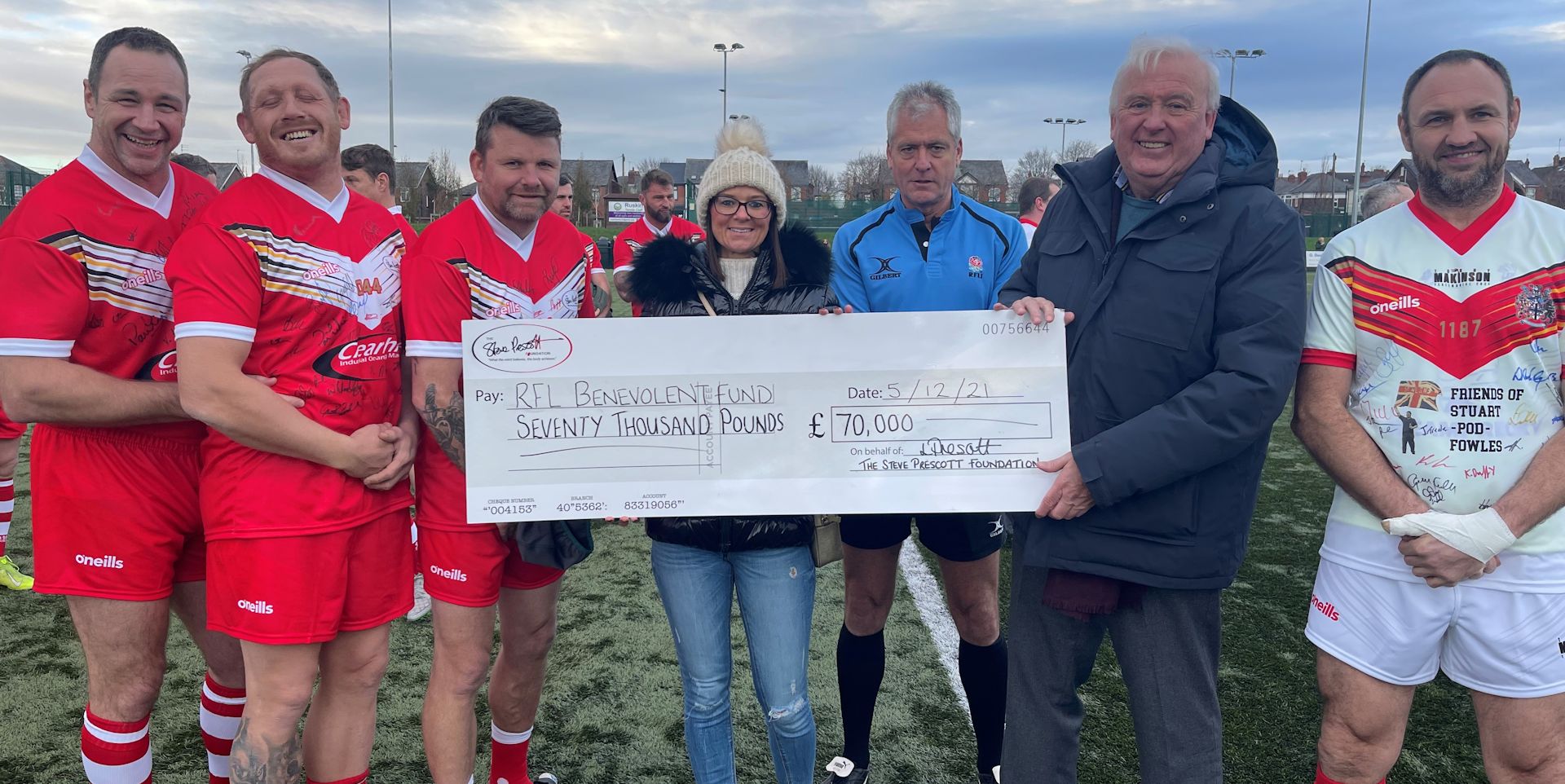 The Steve Prescott Foundation has underlined its commitment to The Christie Charitable Fund and The Rugby League Benevolent Fund with a further £70,000 donation to each charity.

The incredible contributions result from an extraordinary fundraising effort from SPF supporters and sponsors throughout 2021.

SPF General Manager Martin Blondel declared the Foundation “eternally grateful and thankful to everyone for their magnificent efforts whilst in the grip of the pandemic.” 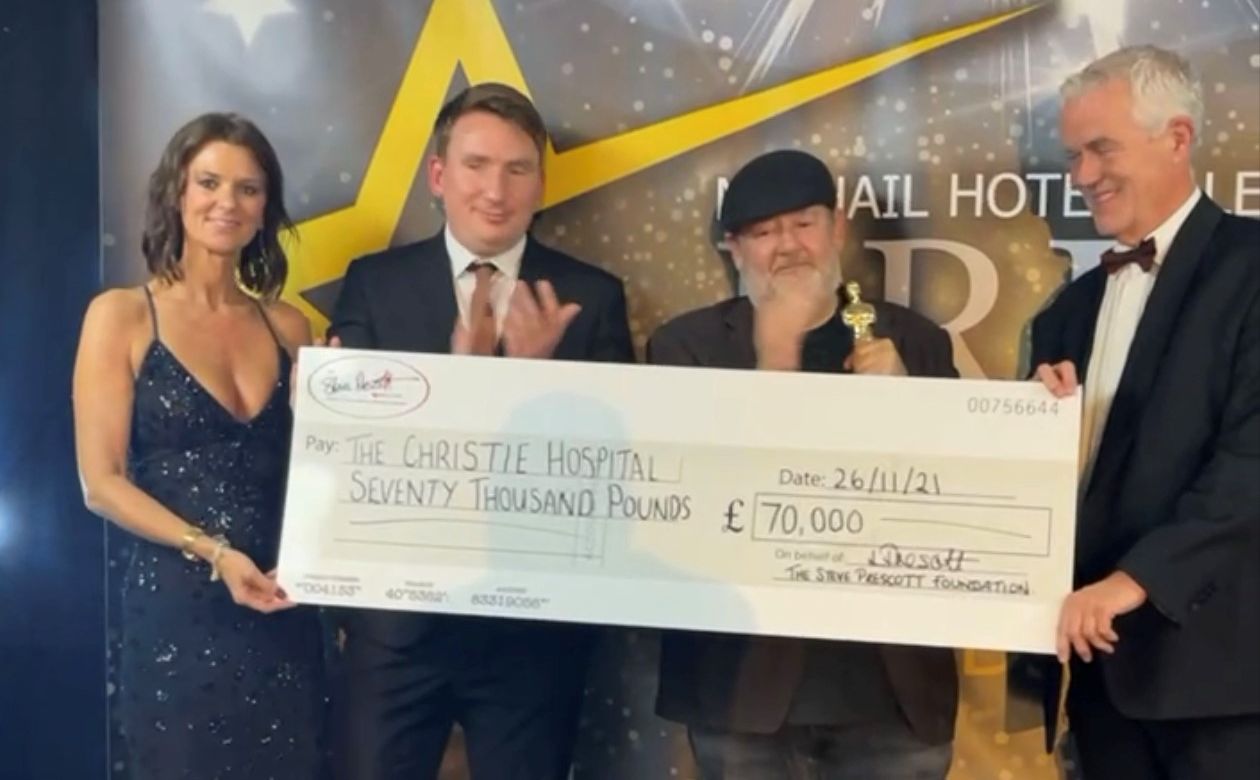 Professor Mark Saunders, Consultant Clinical Oncologist at The Christie accepted the cheque from SPF Trustee Linzi Prescott and was quick to thank the SPF for an “immense donation”.

“It’s a huge amount and I know your fundraisers have been inspired by Steve Prescott in what has been such a difficult year for everyone,” said Saunders, the  lead consultant specialising in the treatment of Pseudomyxoma Peritonei (PMP) and gastrointestinal tumours.

On behalf of the Rugby League Benevolent Fund, chairman Steve Ball outlined the continued importance of the SPF in facilitating its life-changing work.

“We are elated to receive another fantastic donation of £70k from The Steve Prescott Foundation,” said Ball.

“This continued support from their amazing supporters allow us to help those whose life has been seriously affected by playing the game we love! The SPF are our largest donors and really do make a difference to the Rugby League Benevolent Fund”.

In another year which saw so many charities stretched to their limits by the continued impact of the pandemic, the SPF were able to organise a ‘virtual’ GPW Recruitment St Helens 10k in March.

The biggest fundraiser proved to be the SPF 1000 Mile Walk Challenge which started in January. Nearly 500 people of all ages registered for the event and submitted their mileage weekly in a true team effort which became a global event with participants from the UK, New Zealand and Mexico.

“We were delighted that the team included 6 staff members from the Christie Charitable Fund,” said Blondel.

“Each participant who completed the challenge received a special commemorative medal, a certificate of achievement and a 1000 mile challenge tee.”

Steve Prescott’s son Taylor once again lead from the front, with an extraordinary 100-mile run over 48 hours in May.

Helped by a team of volunteer runners, the challenge involved Taylor completing a 10k run every 3 hours continuously for 48 hours and was booster by an anonymous £15k donation.

Other events included a scaled down Yorkshire Three Peaks event in June, the Johnny Vegas Bowls event in August, the Newell’s Projects Golf weekend at La Cala in November and the Ruskin Christmas Markets and Legends Rugby match in December.

Donations to the SPF are inspired by Steve Prescott MBE who passed away in November 2013.

Steve was diagnosed with a rare abdominal cancer, pseudomyxoma peritonei (PMP) in 2006 and formed the SPF in 2007 to raise awareness and funds for the Rugby League Benevolent Fund and The Christie in Manchester.

Steve undertook many physically and mentally exhausting challenges during his illness to raise funds and awareness of the charities close to his heart.  In October 2013 he underwent a pioneering multi-visceral transplant of the small bowel, pancreas, duodenum and abdominal wall at the Oxford Transplant Unit and although this procedure eradicated the cancer, Steve passed away a few weeks later due to complications of surgery.

The Christie has received over £750,000 in donations from the SPF since its inception in 2007.

Linzi Prescott added: “We are delighted to continue to support The Christie including their research programme for Pseudomyxoma related conditions. The SPF is so grateful to all the people who have completed challenges for us this year in such difficult circumstances and for all the donations we have received. It really does make a difference to people’s lives.’