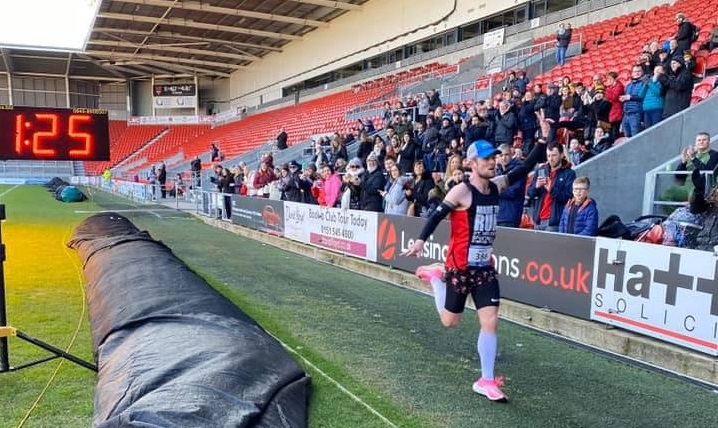 The 10th annual GPW Recruitment St Helens 10k run took place on Sunday 1st March despite gusts of wind of over 35mph. The 10k run is organised by the Steve Prescott Foundation (SPF) in association with principal sponsor GPW Recruitment. It was a real privilege to welcome former St Helens RFC player and Rugby Football League Benevolent Fund beneficiary Tony Atherton and The Mayor of St Helens Councillor Janet Johnson to start the race of 1794 runners from the Totally Wicked Stadium.

The flag ship event of the SPF was inspired by Steve Prescott MBE in his determination to enhance the health and fitness of the whole community. Over 2100 runners registered for the run, with many taking the opportunity to raise funds for their chosen charities including the Isabella Rose Foundation. Team Violet-Grace, Willowbrook Hospice and Alder Hey Hospital.

It was brilliant to see Adam Alderson and Reza Khosravi take part and complete the 10k run. They are truly special people who undertook the same Multi Visceral Transplant operation after Steve Prescott paved the way in 2013. By taking part in the 10k Run and other SPF Charity events people are continuing Steve Prescott’s astonishing legacy which has been highlighted by Adam and Reza’s participation.

Linzi Prescott said “Massive thank you to everybody involved in yesterday’s GPW Recruitment St. Helens 10k run. The marshalls and volunteers did an amazing job and the support on the course was great. Special mention to the 10 in 10 team for their effort and commitment and to Adam Alderson and Reza Khosravi for continuing Stephen’s legacy and making me feel proud. Another fantastic day!”

Every North Road Survivor received a goody bag which included a commemorative event t shirt and a specially designed medal.

First across the line was reigning champion Matthew Crehan of St Helens Sutton AC in 31’26 secs.
Second was Jonjo Doherty in 32’48’’ with Charlie Roberts third in 33’ 13’’.

Winner of the open ladies race was Jade Smith of St Helens Sutton AC in a time of 39’46” with Rachel Fairclough of St Helens Striders second in 40’09’’ and Hannah Whittaker third in 40’18’’.

Feedback for the event was very positive with volunteers marshalls in particular being praised for their enthusiastic support and encouragement along the challenging course along with the excellent volunteers in the bag drop area.
Personal Trainer Mark Hunt led the warm up for the athletes before the run and TDL events provided registration support and time management of the event. The race featured an online facility where runners and followers could track the progress of runners at 2k, 5k, and 8k intervals and find their times and results straight after the run. http://www.tdleventservices.co.uk/

Massive thanks to principal sponsor GPW Recruitment for their continued support and to associate sponsors Branded Items Group, Handepay, Accord Legal Services, Made to Run, CMH Van hire, Timpsons, Vinyline, St Helens RFC and St Helens Council. Commemorative T shirts for all participants were provided by Ian Winter.
SPF ambassador Fraser Dainton was on hand as Master of Ceremonies and commentator of the run.
Other invaluable supporters of the 10k include, St Helens Striders who provided pacers for the run, AJ Barr, St Helens Rotary Club, Kick PA, Triprint, Friends of Victoria Park, Urgent Care North West, Traffic Direct, Paramount Security, St Helens Star and the SPF committee. Thank you so much to everyone for their fantastic support.

A special mention goes to the drumming band Batala who made the event extra special with their upbeat rhythm and music.

The event would not have been possible without the wonderful army of volunteers who donated their time and vocal support for the runners. The marshalls on the course and at the stadium were widely praised for their amazing support.

Martin Blondel, General Manager of The Steve Prescott Foundation says. "We are absolutely thrilled with the GPW Recruitment St Helens 10k run. We feel as though it was the best ever and goes from strength to strength. The feedback we have received has been absolutely top class. The weather was kind for the 10k; We have been asked by a few people to consider changing the date - we have considered this many times before but we have decided that the 10k will always be first or second week in March. This fits in with the athletic and SPF calendar but the adverse weather also fits in with 10k. The great man Steve Prescott did not want a flat track 10k. It means something to become a North Road Survivor; it was not meant to be easy.
Massive thanks to all the 100 plus volunteers who also stood outside for hours making sure the event ran smoothly.’’

‘’The St Helens 10k is now well established as one of the best 10k’s in the country. Already we have 500 athletes who have registered for the 2021 10k run having taken advantage of the Early Bird entry price of £17. The next tier of £19 is now available until we reach 800 runners”