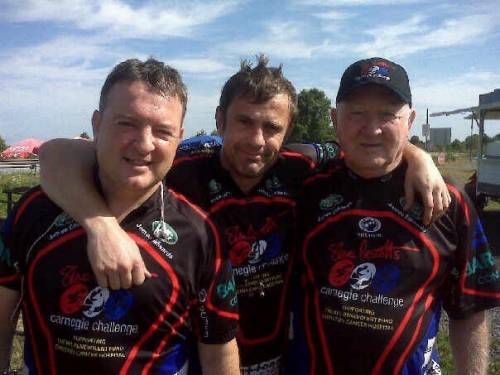 This Saturday, Thatto Heath Crusaders will take on North Wales Crusaders in the Fourth Round of the Coral Challenge Cup.

Rugby League supporters can watch the Coral Challenge Cup fourth round tie between Thatto Heath Crusaders and North Wales Crusaders live on the Our League app and website with commentary from SPF ambassador George Riley. Download the Our League app on Apple iOS and Android or visit rugby-league.com to sign up for FREE’

Mike Denning said "On Saturday we have the biggest game in the clubs history and training in preparation for the forthcoming Challenge Wembley is the perfect way for me to take my mind off the game. It is a 41 mile bike ride, setting off from the Queensway Stadium at 0800 arriving in plenty of time for the kick off. We also intend on riding to at least one Coral Challenge Cup televised fixture on the lead up to Wembley. It is fantastic that North Wales Crusader Director Mark Jones can join us and shows what the rugby league family is about, supporting each other and at the same time continuing Steve Prescott's legacy."

Mark Jones replied "I am a keen cyclist and when I heard that Mike Denning and his colleagues were cycling to the Coral Challenge Cup Fourth Round,  I wanted to join in and help raise awareness of their phenomenal challenge that lies ahead. Steve Prescott MBE transcended Rugby League and was an inspiration to us all.

I really cannot wait for the game on Saturday, it promises to be a great atmosphere and occasion."

Challenge Wembley celebrates 10 years since Steve Prescott MBE tackled the epic 950 mile bike ride from Catalans to Windsor Castle, a 26 mile dragon boat down the Thames, finished off by running a half marathon to Wembley Stadium delivering the Coral Challenge Cup Final ball in time for kick off. On this year's event, Taylor Prescott the eldest son of Steve, at the tender age of 17, will continue his father's legacy and follow in his footsteps every step of the challenge.

If you would like to join the Challenge Wembley team there are five places available, please email info@steveprescottfoundation.co.uk

You can support Mike Denning's effort by donating to www.JustGiving.com/thechair