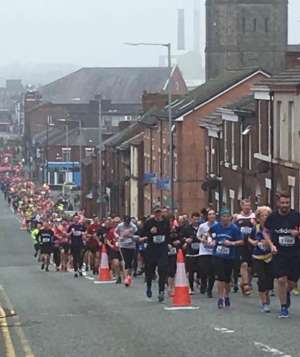 The postponed GPW Recruitment St Helens 10k run took place on Sunday 15th April with the run dedicated to the memory of Violet-Grace Youens who was tragically killed last year.  The 8th annual St Helens 10k organised by the Steve Prescott Foundation (SPF) in association with principal sponsor GPW Recruitment was rescheduled from its original date in March. Rebecca and Glenn Youens accompanied by the Mayor and Mayoress of St Helens Cllr  Joe Pearson and his wife  Sylvia were on hand to start the race from the Totally Wicked Stadium.

The flag ship event of the SPF was inspired by Steve Prescott MBE in his determination to enhance the health and fitness of the whole community. Over 2400 runners had registered for the run, with many taking the opportunity to raise funds for their chosen charities. Glenn and Rebecca Youens ran in support of the Isabella Rose Foundation. Team Violet-Grace and Team Tony Barrow, Willowbrook Hospice, Alder Hey Hospital and Teardrops were other local beneficiaries from fund raising donations.

The SPF had over 100 fund raisers taking part including trustee Linzi Prescott and ambassadors and ex rugby league stars Barrie McDermott and Shaun Briscoe. Team Precky included a team from 60 Years of St Cuthberts who are celebrating their 60 year anniversary. Novelty runners included SPF mascot Precky the Panther and a runner in full armour.

Every North Road Survivor  received a goody bag, which included a commemorative event t shirt and a specially designed medal which acknowledge the 150 Year St Helens celebrations. Each bag also contained a NHS Organ Donation registration form and sticker in memory of Violet-Grace whose donation of organs following her tragic death allowed the life of others to be saved. 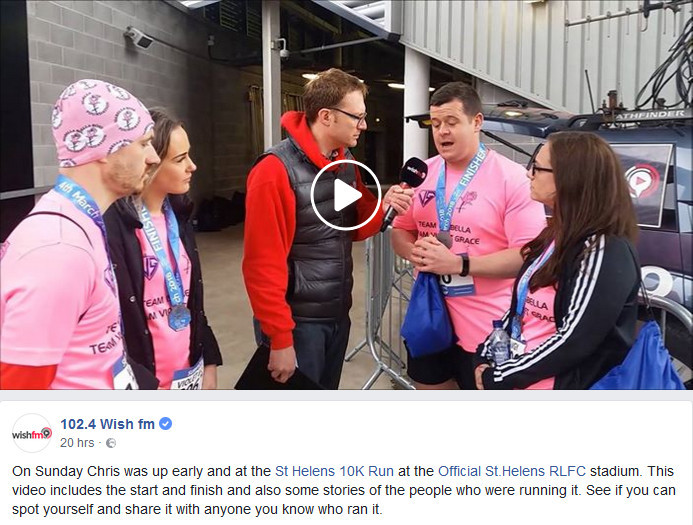 First across the line was Matthew Crehan of St Helens Sutton AC from Newton-le Willows in 31’ 21’’.

Winner of the mens 40+ was Francois Rafferty, with Simon Rogers winner of M50+.

Winner of the open ladies race was Kelly Hamilton of St Helens Striders in a time of 40’18’’ with Jennifer Houghton of Kirby Milers second in 41’24’’ and Louise Blizzard of Warrington AC third in 41’47’’. Louise was also first in the F40+ category with Janice McDonnell first in F50+.

Feedback for the event was very positive with volunteers marshalls in particular being praised for their enthusiastic support and encouragement along the challenging course.

Thanks to Mark Hunt of gymBUG who warmed up the athletes and TDL events who provide registration support and time management of the event. This year the race featured an online faculty where runners and followers could track the progress of runners at 2k, 5k, 8k intervals and find their race time and results. http://www.tdleventservices.co.uk/

Chris Milow of Wish FM was on hand as Master of Ceremonies and commentator of the run.

Thank you so much to everyone for your fantastic support.

The event would not have been possible without the army of volunteers who donated their time and vocal support for the runners. The marshalls on the course to ensure the safety of runners and to encourage the runners were praised for their amazing support.

On Saturday over 70 runners joined in the 2k Fun Run in Victoria Park. The winner was Adam Bowles.The event was supported by the Park Run volunteer marshalls. Medals were presented by Linzi Prescott, Trustee of the SPF