WHEN YOU’RE FACED WITH LIFE AND DEATH, YOU CHOOSE LIFE 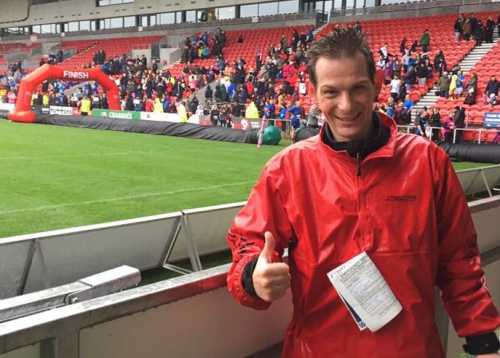 Adam Alderson (37) from Preston-under-Scar in Wensleydale, North Yorkshire, had only just embarked on what should have been the most exciting chapter of his life so far. He was living in Australia with his girlfriend Laura, and whilst working they were making the most of the hospitality and weather.

But the care-free life they were just starting to enjoy wasn’t to last, and in a devastating turn of fortunes the couple that seemingly had everything were faced with a choice that no one should have to consider; life or death.

For many years Adam had suffered with bowel problems, like many people with similar symptoms, he was misdiagnosed as having irritable bowel syndrome (IBS). When his condition deteriorated whilst in Australia, Adam sought medical advice and was sent for further tests.

The results were conclusive, Adam had pseudomyxoma peritonei (PMP), a rare form of peritoneal cancer. His only option was to return home to the UK and to start a course of treatment at the Christie cancer hospital in Manchester.

He comments: “We were having the time of our lives, literally making friends, going out and partying, working hard and playing hard. There was never any doubt that moving to Australia was the right thing for us and we were going to make the most of it.

“The diagnosis came out of no-where. I just collapsed. You never know how you will react, you don’t plan for it and it’s not something you expect to happen. It’s the old cliché – it’s never going to happen to me. Our lives were put on pause but we had no idea at this point just what lay ahead.”

On returning to the UK, Adam was immediately admitted into the Christie and preparations were made for him to have an operation in the hope that the surgeons could remove as much of the tumour as possible. The debulking procedure would be coupled with HIPEC, which involves washing the tumour in hot chemotherapy.

Knowing his operation should take up to 18 hours, when Adam came round in the recovery suite and realised it was only 2 hours later he knew there was a problem and it was unlikely the news was going to be positive.

He continues: “I knew as soon as I came round. It couldn’t possibly have been an 18-hour procedure and the faces on those around me told me all I needed to know. The surgeons explained the operation was too dangerous and as a result there was nothing more they could do.

“Just a month earlier, I was looking forward to a life at the other side of the world, I was now told that I had up to 2 years to live. I was only 35 years old.”

Adam was put on palliative care and embarked on a process that revolved around hospital visits, medication and the slow degeneration of his strength, basic abilities and quality of life. Despite wanting to make the most of the time that he had left, he found it increasingly difficult to accept the hand that he had been dealt.

He continues: “I’m not known for my patience, and I have a very fiery temper so to be told that I was going to die and there was nothing I could do about it wasn’t sitting well with me. I turned to the internet and started to do some research. It was a long-shot, but there had to be something more that could be done.”

During a hospital visit Adam was told that there was another young man of a similar age, former England and St Helens Rugby League player, Steve Prescott, that also had PMP. Interestingly, despite having a similar prognosis, he was seven-years ahead of Adam, giving him some hope for a longer future than had been advised by his medical team.

It was during this time that Adam learnt that Steve had undergone a pioneering surgery at Churchill hospital in Oxford. The operation was complicated and a world first ever to be performed; it would require the removal of Steve’s tumours followed by a multi-organ transplant.

The 32 hour operation was a success, however Steve sadly lost his battle thee-weeks-later as a result of graft-versus-host-disease, a complication that can occur following transplants.

The news was devastating for Adam but he also took strength from Steve’s attitude and determination towards his diagnosis of PMP.

Adam continues: “I had and still do have a huge respect for Steve, I couldn’t let this legacy that he had started stop before it had begun. I decided there and then that this was an opportunity for me. I started researching and came up with the same name over and over again, Brendan Moran.”

Brendan Moran, a surgeon from Basingstoke and North Hampshire Hospital and specialist in PMP, was working towards more advanced and progressive treatments of the disease that would focus on cure as opposed to prolonging life.

Adam used Facebook and the internet to learn as much as he could before approaching Mr Moran direct. Requesting that he look at his scans, Mr Moran agreed.

By this time, Adam’s health was rapidly deteriorating. He was fed through a tube that had to be administered by his girlfriend, Laura, he was on 24-hour care, required hourly medication and had lost so much weight he couldn’t get himself out of the bath.

He continues: “It was no life. I was dying; my girlfriend could see it, my friends could see it and I was very aware of how little time I had left. This was my last chance and it was a risk but it had to work. There was no other option.”

The news wasn’t good and Mr Moran explained that surgery to remove the tumours would be too risky and would do more damage, in turn reducing Adam’s life expectancy.

Adam continues: “Crushed is the only word I can use to describe that moment. It was the end of the line. I’d done all I could and it wasn’t enough. I just didn’t know what to think. My fight was over.”

Before leaving, Mr Moran asked Adam if he had heard of Steve Prescott. He explained that despite reports to the contrary – which made it clear the multi-organ transplant would not be repeated - there may be a chance of him having the same procedure.

Without hesitation Adam asked to be put forward. He made it clear that he was aware of the risks and the complications and also of the fact that there was only one other patient to survive the procedure.

In order for Adam to undergo any surgical procedure he had to put on weight and to exercise. As someone who was just 55kg this was his first major challenge.

He continues: “Putting on weight was just impossible. I was fed through a tube at this point and was so tired all of the time. I called upon everything I had left – and I mean everything – to get me to where I needed to be. It was so hard and I have to admit some days I just wasn’t sure that I was strong enough but I would look at Laura and think, there has to be a future. I have to get through this.”

On a return visit to Oxford in July 2015 Adam was told to go home and to pack a bag, he was finally strong enough to be considered for the operation. He was told that he would be called if a donor was found and he would have to get from Wensleydale to Oxford in just 5-hours.

Just 2 days later and the call came at 2am in the morning. The couple grabbed what they could and made the agonising trip to Oxford.

Adam continues: “This was easily the most difficult journey I have ever made. I was in excruciating pain and despite my medication my body was shutting down. This long in a car for anyone is uncomfortable but for me it was nothing short of a nightmare.”

While the couple drove to Oxford the organs from the donor were tested and found to be a match. Preparations were made so that Adam could be admitted as soon as he arrived.

Adam continues: “It was surreal. We were here and there was some hope – but I was terrified. I looked at Laura and she looked at me, we didn’t need any words. Instead we chose some new slippers on the iPad and then it was time.”

The 17-hour operation, required around 30 people working shifts and resulted in the removal of a 10k tumour and Adam’s stomach, large bowel, small bowel, gallbladder, pancreas, appendix, spleen and his abdominal wall. He was then transplanted with multiple abdominal organs.

Remaining in an induced coma for several days, doctors were surprised with Adam’s progress and soon after it was officially announced that the procedure had been a success. He would remain in hospital for several months and although his recovery was painful one thing was abundantly clear, he was alive.

Adam continues: “No one should ever have to go through this – it’s not what I expected of my life but I cannot thank the surgeons and Mr Moran enough. I came round after surgery and I knew that I still had a way to go but I was here. It was the start of a different chapter and one that focused on survival, not on death.”

Over the next year Adam would be readmitted to hospital but with the support of his medical team and MacMillan Cancer Care, along with his girlfriend – who was by his side throughout – he became stronger and started to enjoy a more ‘normal’ life.

He continues: “Simple things like enjoying food again or going for a long walk were just brilliant. I was still tired and probably shouldn’t push myself as much as I do but I have my life back. We celebrated my first anniversary recently – it was a year since my surgery. Looking at pictures you just wouldn’t believe how far I’ve come.

“I really cannot thank the medical team enough. They believed in me and they took a risk – a big risk - but it has paid off. I also want to thank the donor family. The harsh reality is that someone has lost their life for someone else to live and I will never forget that or take it for granted. I will appreciate that for as long as I live.”

Adam and Laura are now embarking on their next adventure. They are planning their wedding, which will take place in 2017, following which they will take on the Mongol rally, believed to be the ‘greatest motoring adventure on the planet’.

The challenge will see them travel unassisted – in a 15-year old Suzuki Jimny - across 15,000 miles, covering 24 different countries and difficult terrain. Supported by 2 friends the couple are working hard to raise donations for Steve Prescott Foundation and Macmillan Cancer Support.

Adam concludes: “As someone who has no patience the Mongol rally will be a test of mental and physical strength, endurance and team work. Some of my friends have said that we are bonkers for even considering it but I look at things differently – I’ve been given a second chance and I’m going to make every moment count.

“This is my opportunity to give something back and I hope that as well as giving us an experience we can remember forever it will allow us to raise the profile of PMP, the fantastic work by Mr Moran and the surgeons at Oxford, the amazing care delivered by Macmillan Cancer Support and most importantly the belief that you should never give up.”

For further details and to follow the team on their next adventure simply like www.facebook.com/YorkshireYaks or @YorkshireYaks.