The Steve Prescott Foundation would like to thank GPW Recruitment for their fantastic continued sponsorship of the St Helens 10k.  The 7th annual St Helens 10k was run on Sunday in atrocious wet weather. The flag ship event of the SPF was inspired by Steve Prescott in his determination to enhance the health and fitness of the whole community.

The Mayor and Mayoress of St Helens David Banks and his wife Jeanette were on hand to start the race from the Totally Wicked stadium.  2000 runners from running clubs to novice runners braved the extremely challenging North Road as they made their way round the testing course.

First across the line was John Ashcroft of Liverpool Harriers in 31’53’’ who was more than a minute ahead of second placed Matthew Crehan from Newton-le willows in 33’03’’. Third was Mark Dunham in 33’32’’. 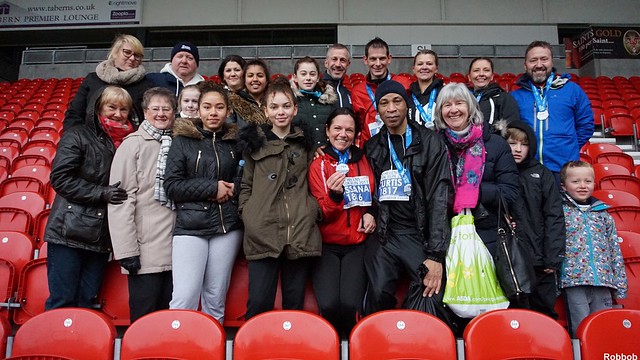 A really courageous runner was Adam Alderson who is a pseudomyxoma peritonei survivor who endured a similar life saving multi visceral operation pioneered by Steve Prescott. Two of Precky’s consultants Mark Saunders of The Christie and Georgios Vrakas also ran the race.

Many runners took the opportunity to raise funds for their chosen charities including the SPF, Willowbrook Hospice, Alder Hey Hospital, Teardrops and the Isabella Rose Foundation The whole town of St Helens can be very proud of the community spirit shown in support of the event.

Feedback for the event was very positive despite the weather.

Thanks to Mark Hunt of gymBUG who warmed up the athletes and TDL events for the time management. This year the race featured an online faculty where runners and followers could track the progress of runners and find their race time and results. www.tdleventservices.co.uk

The event would not have been possible without the army of volunteers who donated their time and vocal support for the runners. The marshalls in particular were on the course to ensure the safety of runners in appalling cold and wet weather. Sincere thanks to everyone.

Thank you so much for your fantastic support.

Online entries are now being taken for the St Helens 10k 2018 www.sthelens10k.com

On Saturday over 150 runners joined in the 2k Fun Run in Victoria Park. The event was supported by Anthony Young of Park Run and many volunteer marshalls. Medals were presented by Linzi Prescott, Trustee of the SPF