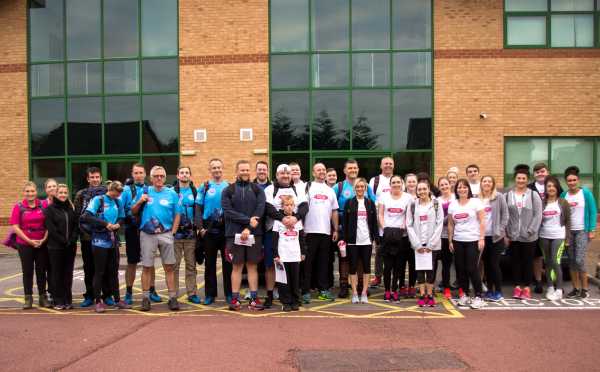 Staff from Haydock-based Handepay used rugby league’s showpiece Grand Final to smash their £10,000 charity target set in May 2016 – seven months ahead of schedule. The Grand Final-themed sponsored walk helped them take their fundraising grand total for The Steve Prescott Foundation to £13,000 in just five months.

23 Handepay staff walked the 18 miles from their office to Old Trafford on Saturday to raise £5,500 – the equivalent of more than £300 per mile – before enjoying a well-deserved seat to watch Wigan Warriors take the Super League title, with hospitality provided by Hotel Football.

The rugby-themed walk was especially apt given Handepay has been fundraising since May for The Steve Prescott Foundation, which was set up in 2007 by the former St Helens, Wakefield and Hull player Steve Prescott, following his diagnosis with a rare form of cancer, pseudomyxoma peritonei (PMP). The Great Britain and Ireland international passed away in 2013, and, in recognition of his amazing fundraising efforts, rugby’s end of season Man of Steel award is now named after him. 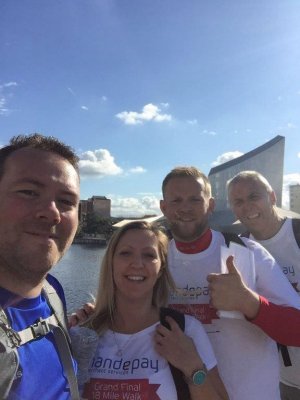 Members of the Foundation, some of whom will be climbing Mt Everest later this month, joined Handepay on the aptly rugby-themed walk and were a great encouragement to all involved.

Andy Peake, managing director of Handepay, says: “I’m so proud of everyone who did the walk and raised money for the charity. This is an amazing effort from a brilliant team.

“We set a big target to raise for The Steve Prescott Foundation, and it’s so appropriate that we smashed that figure by walking all the way to the Super League Grand Final.”

Martin Blondel, general manager of The Steve Prescott Foundation, adds: “£13,000 is a huge sum and to deliver it in just five months is testimony to Handepay’s dedication to helping the people of the North West. The funds they’ve raised will enable us to make a difference to the lives of those who need it, and I’d like to take this opportunity to thank everyone involved in the fundraising activities.”