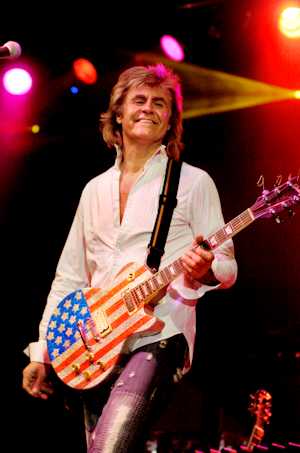 John has been inspired by the story of Steve Prescott's brave fight with cancer and his pioneering multi visceral transplant that Steve endured.

John was approached by Bradford Bulls fan Ben Moorhouse in June 2015 with Steve's story. Ben and partner Gaynor Thompson were planning their own special challenge by walking the 67 miles from Mandraki to Prasonisi on the island of Rhodes to raise funds and awareness of the SPF in the process. Ben and Gaynor had created their own video montage of Steve's fundraising since 2006 and wanted a soundtrack to complement it. Ben knew of John's impactful anthem St Elmo's Fire which had been a huge worldwide hit and US number One which was the song also used by the Rick Hanson foundation that funds spinal research and when John heard of Steve’s story he immediately agreed to compose the special song.

John says ‘I was sent this video link a few weeks ago and was so moved by it I was compelled to write "Man of Steel" as a tribute to Steve Prescott. Steve's story is truly inspiring, awarded the MBE for his tireless efforts to  raise funds and awareness for medical research whilst battling his own debilitating illness is testament to the human spirit.’

The emotive words capture the courage and inspiration of Steve Prescott. The track has been recorded by John and friends from his vast network of impressive musicians including Nashville based Charlie Morgan who was Elton John’s drummer for fifteen years, Ian Lynn, keyboards, has worked with Sheena Easton hits and with Barbara Dickson. Richard Cottle, piano, has just completed Lisa Stansfield’s new album and has worked with David Bowie and on various hits and TV themes, David Mackay producer/composer of so many hits from Cliff Richard, Bonnie Tyler, Frankie Miller to Cilla Black hits as well as TV series music themes like Bread, Auf Wiedersehen Pet and Dr Willoughby. Geoff Whitehorn, electric guitar, has performed with everyone from Elkie Brooks to Procol Harum along with Simon Hanhart who mixed the track.

The track is available for download on iTunes and Amazon just in time to inspire the party of thirty eight climbers including Rugby league legends Adrian Morley, Lee Briers and Barrie McDermott and Harry Potter actor Matt Lewis who will be climbing Mount Kilimanjaro in 6 days and playing the world's highest ever game of rugby league in aid of the SPF. It is hoped we can create vast awareness to the public in the hope we can create a vast download on the first day at the summit of Mount Kilmanjaro, this will in turn secure a national chart position for the song which will make this project worth all the effort, time and creativity that has been put in. 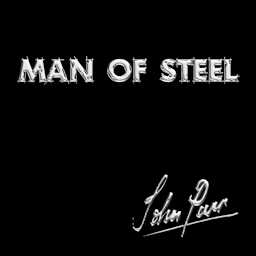 Linzi Prescott says 'I am overwhelmed and deeply touched by this special song 'Man of Steel.' It brings a tear to my eye every time I listen to the track. Myself and the boys, Taylor and Koby are very proud!I cannot thank John Parr enough for all the time, effort and dedication he has put into composing this song and also the fantastic calibre of musicians who have helped to record it with him. I must also express my thanks to Richard Allen for advising and continually communicating with us throughout. The song is another branch to Stephen's legacy, which will see his name live on and continue to inspire!'

The SPF would like to thank John Parr for his fantastic gesture and for his time and dedication to producing this special song in memory of Precky. Massive thanks also to Richard Allen, audio engineer and Press & Marketing Manager to John Parr Music Limited for his support and advice in getting this track released. Thanks also to the musicians for their time and expertise in recording the track. If this song can be a fraction of the success of St Elmo’s fire then the legacy of Steve Prescott will continue forever.

and on You tube:-

For further info see the websites