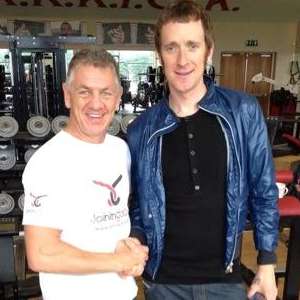 Reason to "Race across Europe":

When I watched Steve play he was fearless for his size, he was really comfortable under pressure of taking the "high bomb" I admired him immensely. As with everyone in the Rugby League community when I heard the news about his illness, I was mortified.

The Carnegie Challenge in 2009 was a fantastic experience, a great challenge. This gave me the appetite for cycling.

In 2011 Steve took on Five Marathons in Five Days from Hull to the Grand Final. I received a phone call late at night hearing that Steve had suffered a blockage in his bowel and would be unable to run the middle day and would I be able to take his place to keep up the morale of the rest of the team.

When I arrived in the morning I looked at  Steve and he was as pale as a ghost. He was given orders to stay in the Car. This was never going to happen, he managed to run 26 miles in excruciating pain and complete the days run.

His courage on the field was nothing compared to the courage he shown off the pitch. I seen the way he inspired people and he was so humble in the process.

When I heard about RACE I had to be in the team. The logistics of tackling 3000 in 6 days really excites me.

What are you most looking forward to:

We have to work together as a team to reach our goal. I may leave some of the hill climbs to the younger lads in the team but will make up for it in other areas. The team ethics is what you miss most as a player, I am fortunate to have that back as part of the SPF.

What are you least looking forward to:

Being uncomfortable, when we are not in the saddle, travelling in the support vehicles is not going to be pleasant.