An Afternoon with Sugar Ray Leonard sponsored by Maxilead 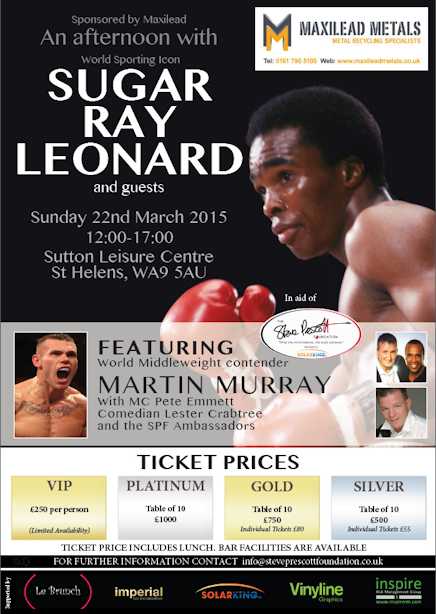 We are delighted to announce that The Steve Prescott Foundation (SPF) will be hosting an afternoon with World Sporting Icon Sugar Ray Leonard at Sutton Leisure Centre, St Helens on Sunday 22nd March.

Sugar Ray Leonard was world champion in five different weight categories and is arguably one of the most famous sporting names in the world.

Throughout his glittering career he beat legendary opponents such as Marvin Hagler and Roberto Duran and now works as an analyst for major television companies in the United States and for his own personal foundation.

He was the first boxer to earn over $100m in purses. He won an Olympic Gold Medal in 1976, was named ‘Boxer of the Decade’ for the 1980’s by Ring Magazine and was inducted into the World Boxing Hall of Fame in 1996.

The 58-year-old is thrilled to be coming to St Helens for an afternoon lunch, brought to you by The Steve Prescott Foundation, that can’t be missed.

Sugar Ray said “I am delighted and very much looking forward to coming to St Helens and support The Steve Prescott Foundation. I have heard Steve was a remarkable man. I also look forward to meeting many of my North West fans in the UK. I am also honoured to share the stage with World Middleweight Boxing Contender Martin Murray. It would be great to see the World Middleweight Championship Belt again!”

Martin Murray who is fighting to become middleweight Champion of the World in Monte Carlo on February 21st v Gennady Golovkin said “Like many boxers Sugar Ray Leonard was one of my heroes as a child. He is one of the reasons I put on the gloves. I can’t wait to meet him and help raise funds for the charity I hold close to my heart. I hope to bring the belt with me. It is going to be a fantastic occasion.”

Mike Denning the chairman of The Steve Prescott Foundation believes the event has the potential to raise significant funds for the charity, which raises funds for The Christie, the Rugby Football League Benevolent Fund and the Oxford Transplant Unit.

“It is part of the SPF remit to bring World Class people and events to St Helens. Steve would be really excited at the thought of hosting Sugar Ray Leonard. I don’t know how much money we’ll make, but any money raised for the charities we support will be amazing.  Sugar Ray Leonard is a huge name, an iconic name in the sporting world, and for him to come and support Steve’s name and legacy will be phenomenal. An opportunity like this comes along very very rarely – and we are expecting high demand for places when tickets go on sale. It’s going to be a remarkable and unforgettable occasion.”

It promises to be a knockout Sunday Lunch, with top Master of Ceremonies Pete Emmett along with Comedian Lester Crabtree and a host of SPF Charity ambassadors who will also be available for a Q & A session.

Sutton Leisure Centre will once again be transformed into a fantastic sporting arena like it was in 2010 for the League of War Boxing Event.

Tickets will go on sale at www.steveprescottfoundation.co.uk/shop on Friday 16th January in four separate ticket categories from £55 upwards.

Digital Images Available Without Watermark, £7.49 Each.
PayPal; MikeDean01@hotmail.com (include img number from photograph as reference)
Click here to see availible photos and contact Mike Dean on 07876 341 878 to make a purchase.
All proceeds from sales to the Steve Prescott Foundation!