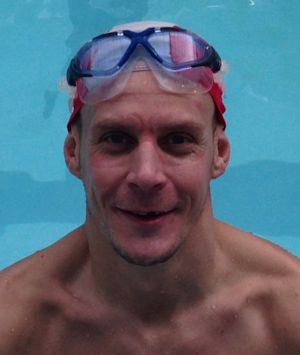 As this is my first blog, I’d better give you a quick rundown of who I am, and why I’m doing this challenge.

In a nutshell, I dislocated my neck and shattered two vertebra eight years ago while playing rugby league for the amateur team Hull Dockers. My road to recovery has been a long one, but it’s been made easier thanks to the support me and my family have received from RL Cares and the benevolent Fund.

My physical state at the present is that I can walk again (after initially being told that I never would) with the aid of crutches. This may be as good as gets for me, but I’ll never give up on improving even further.

So, why the swimming challenge?

Well, let’s face facts, I’m not going to be running any marathons any time soon and I see this as the best way of challenging myself physically.

I began thinking about doing some sort swimming challenge at the turn of the year for two reasons. The first being training or rehab is always easier, or more enjoyable, when there’s something to aim for and you have a goal to reach.

The second is I’m always up for raising funds and awareness for this charity because I know first-hand how important it is. Rugby League is the toughest sport on the planet and those that play it at any level could get seriously injured, it’s vital that should this happen, the player receives the support that I did.

Whatever the amount I raise will be split between RL Cares and the Steve Prescott Foundation. Precky inspired a lot of people, me included, and the Christies charity that the SPF foundation supports is another one I feel strongly about.

Hydrotherapy has played a big part in my rehabilitation, even in the first few months after my accident when the physiotherapists would take me to the pool in Pinderfields Hospital. At first, it would just be to help me stand and aid with my stretching.

When I was discharged, I carried on getting in the pool as often as I could at the gym were, to this day, I carry on my rehab. Up until last summer, the only stroke that I could do is best described as a sort of ‘dying frog breast stroke’. It wasn’t pretty looking, but it was effective in that it gave me a decent enough workout.

I then met a guy at the gym who has since helped me improve the way in which swim dramatically. I can now swim freestyle and the only aid that I use is a small floatation device, called a Pull-Buoy, which is placed in-between my legs to stop them sinking. The reason for this is that when I’m laid horizontally in the water I have very little leg-kick. So, nearly all of the effort is upper body but I have devised a technique that when I take a stroke I use my core strength to sway me from side to side and this helps generate some movement from the ‘pins’.

The other issue that I have is breathing correctly. At first, I was holding my breath for way to long between strokes; which is not ideal when doing exercise of any kind. The reason for this is that I still have movement restrictions in my neck due to the surgery on it. But, I’ve found a system were now I’m taking a breath every four strokes while exhaling under water, which seems to be working out for me.

I’ve been swimming 150 lengths a week, which is split over three days at 50 lengths a session. My time per session is currently around one hour to do 50 lengths of a 25 metre pool. My target is to hopefully be ready to do the challenge by the end of April/beginning of May time, however, I’m not going to rush things. 5k might not sound a lot but for someone with my physical impairments it is and then there’s squeezing everything else in around it such as work, family and our eight-year-olds social life!

But, seriously, I’m enjoying the training and when I’m in the water I feel like I’ve been released from my shackles! I can’t wait to challenge myself and hopefully I’ll be able to achieve what I’ve set out to do.
Please take a minute and visit my just giving page, any donations, big or small, are massively appreciated. http://www.justgiving.com/Pete-Stephenson1

Well, that’s the story so far. I’ll be updating the blog with my progress as often as I can but in the meantime please have a look around the site and check out what RL Cares does for the greatest game of all.......
Pete Stephenson.

As the challenge is getting nearer, I’ve stepped up my training and reached a milestone that I never thought possible, when first starting out freestyle swimming just three months ago.

I’d had a bit of a setback a couple of weeks ago, when I developed Otitis Externa (which is also known as ‘swimmer’s ear) in my right ear which caused the inside to swell and it was extremely painful. This affected the amount of times I could go in the pool until it had cleared up which was really frustrating.

The commitment, routine and training is what I’ve enjoyed most about preparing for this challenge because that’s what I miss from my rugby days. But, after a dose of antibiotics I was good to go again after week.

Up until that point, I had been swimming between 40 and 50 lengths a session, three times a week with a bit of light weights in between. Annoyed at having to miss a week’s training the first session back I decided to test myself in trying to conquer my first mile which is 64 lengths of a 25 metre pool.

Now it’s only 14 more than what I’d been used to but it felt like a hell of  a lot more, but I did it, and in a decent time of just under an hour. It made up for the week off but it also made me realise how difficult it is going to be to do 200! However, As Steve Prescott always said “A challenge isn’t a challenge, unless it’s challenging” and this one, for me, will be just that. I’m confident that on the day my mental strength will carry me through as much as my body will.

Physically, I’m feeling good in myself and my upper body has started to get a bit of tone to it. As I’ve already stated in the first blog the majority of my swimming technique comes from the upper body as I don’t have much leg kick when laid horizontal in the water. The plus side to this has been getting some shape back in my shoulders and chest which will bode well for the summer. Don’t get me wrong, I’m not quite the shape of Michael Phelps but I might have to dig out the vests for when the warmer weather comes along!

As many of you will have read over the last couple of week’s there has been a serious spinal injury in the NRL. Alex McKinnon of the Newcastle Knights suffered a broken neck at the same level as me and the prognosis hasn’t been good. It’s too early for anyone to determine the extent of what Alex’s recovery will be as every spinal cord injury is different. But, there are positive signs in that, like me, he has not severed his spinal cord and he does have movement in his right arm. Alex faces a long battle ahead of him that will at times feel like he’s had to start all over again as he tries to regain movement, feeling and function. I’m sure having the mind-set of rugby league player will hold in good stead though and aid in his rehabilitation.

I’m also sure he’ll receive the upmost support from everyone in the rugby league community and from Australia’s Men of League foundation that is their version of RL Cares.

I guess Alex’s injury just reiterates just how important charities like RL Cares is because no matter how rare these sorts of injuries are, it unfortunately will happen again and it could be to anybody at anytime.
And that’s part of why I’m doing this challenge to raise both funds and awareness for RL Cares because it’s vital that their support is there should a serious injury happen to a player again in this country.

The date for the challenge has been set and I’ll be doing the swim on Saturday May 3rd at 12pm at Total Fitness in Hull. Anybody who would like to come along to support me is more than welcome.