It is hardly the life of Riley - a fun runner having to go through the pain barrier every few weeks as part of a non-stop charity challenge.

But BBC Five live sports reporter George Riley is prepared to put in the hard yards and go that extra distance in memory of Rugby League player Steve Prescott.

George has pledged to run more than 100 race miles during the year for the Foundation which bears the name of his close friend who died last November, aged 39, after battling stomach cancer, seven years after he was given just months to live.

George (35) has already beaten his initial target of raising £5,000 well before he undertakes the Bupa Great Manchester Run on Sunday, May 18, as part of his series.

He said: "It's not the first challenge I've undertaken for Steve but it's the biggest and the first I've not been able to talk to him about.

"He was an exceptional player, astonishing fundraiser, the perfect family man and a loyal friend. He'll be missed massively but never forgotten. My challenge is about his legacy and continuing to raise funds."

Prescott, who spent much of his career with home town club St Helens, set up the Foundation after he was diagnosed, raising £500,000 for charities including The Christie in Manchester where he was treated and Try Assist, formerly the RL Benevolent Fund. He was awarded an MBE in 2009 for his fundraising efforts.

His bravery has galvanised the close-knit Rugby League community and players from St Helens, Warrington, Wigan and Leeds joined forces at Old Trafford Football Ground - part of the route of the Bupa Great Manchester Run - to show their support for George's endeavours.

In the Bupa Great Manchester Run he will be hoping for better luck than last year when he was ill twice during the event. George added: "Running 100 miles doesn't sound too much but I've got to do about five times that in training. I've done the Manchester 10k twice before and it's always a fabulous occasion."

Sean O'Loughlin , captain of Wigan Warriors, said: "I definitely think George will complete the 100 miles. The most important thing is raising money for the Steve Prescott Foundation and anything we can do to raise awareness for that cause is great."

Mickey Higham , of Warrington Wolves, said: "It's great what George is doing for a really worthy cause. Sadly, Steve Prescott is not here but he's still helping people fight cancer so I'm more than happy to help this special effort."

Barrie McDermott , the former Leeds Rhinos player, is hoping to run the Bupa Great Manchester Run with George. He said: "I'm happy to support him and I was privileged to play with Steve many times. As an ambassador for the foundation, I'll do as much as I can to support both the charity and George in his exploits."

St Helens forward Sia Soliola said: "It's wonderful that all the clubs can come together and do this for Steve because he was a great man. The Steve Prescott Foundation is obviously always linked with St Helens with him being a local boy, what he's done for the game and what he means to the town. This challenge epitomises what the Steve Prescott Foundation is all about."

To support George's fundraising go to justgiving.com/georgeyboy100 or donate by texting PREK73 £10 (or a chosen amount) to 70070.

* Entries are still open for the Bupa Great Manchester Run which is Europe's biggest 10k running event attracting a field of up to 40,000. To get involved visit www.greatrun.org/Manchester 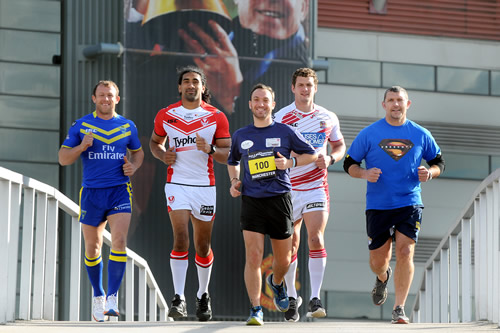 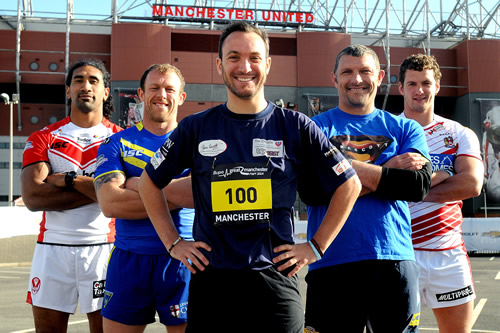 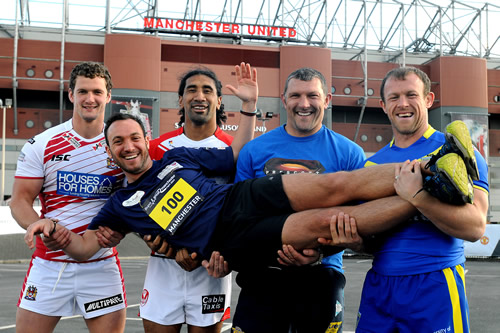 The Bupa Great Manchester Run is brought to you by a partnership between Manchester City Council and event organisers Nova International and is sponsored by Bupa. Nova International, headed by Olympic medallist Brendan Foster, is one of the UK’s leading event management and sports marketing agencies. The company’s current brand portfolio also includes some of the biggest running events in the world, all based on the Bupa Great North Run, Britain’s biggest running event with 56,000 entries. Nova International was established in 1988 and has a strong sporting pedigree. Based in Newcastle upon Tyne, Nova has established itself as a market leader in the world of sports marketing and event management. For more information please visit www.greatrun.org

About Manchester:
As a city that lives and breathes sport, Manchester continues to strengthen its impressive reputation for attracting major international sports championships. In 2012, the City was named 5th in the Ultimate Sports City List, and No.1 city with a population of under one million. In 2014 Manchester will host several major sports events, including the UCI BMX Supercross World Cup, Super League Magic Weekend and the Sainsbury’s 2014 School Games. These events help to raise the city's global sporting profile, while bringing long-term social and economic benefits to Manchester and its residents. The City's excellent range of accessible sports venues and facilities, combined with its school and community sports development programmes, provide the springboard for Manchester's sporting stars of the future. Visit www.manchester.gov.uk for more information.