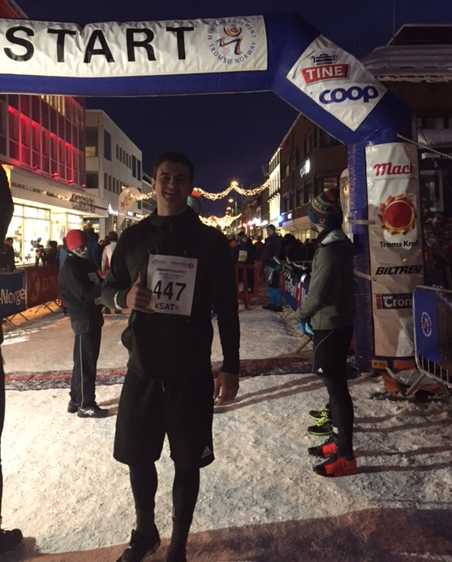 Peter Starling, a 21 year old from Beverley recently completed the spectacular Polar Night Half Marathon in Norway on the 6th January 2018, raising funds for the Steve Prescott Foundation (SPF).

Peter said. ‘As I have been a Hull FC fan from the age of 6, I was a huge fan of Steve's during his time at the club because of his true professionalism. I had the honour of meeting Steve outside the Castleford Tigers ground after an away game there one year. I admire all the challenges that Steve and other members of his foundation went on to complete especially considering the condition of Steve's health, which has inspired me to take some challenges on myself.’

The torch lit race is held in Tromso which is within the Arctic Circle in northern Norway. It's really cold and the race takes place during the Polar night period when the sun doesn't rise above the horizon giving only 2hrs of daylight at around midday.  It offers the chance for runners to see the spectacular Northern Lights if the conditions are right. It is the northernmost half marathon in the world.

‘It was an incredible few days and I would recommend it to anyone. I finished with a time of 1:45:01, which I was proud of for my first ever competitive race. I have collected all of the donations to the charity which now totals £320. I can't think of a better foundation/charity to donate the money to.’

You can still donate to Peter’s Just Giving page: https://www.justgiving.com/fundraising/peter-starling

Sincere thanks to Peter for choosing to support the Steve Prescott Foundation for his epic challenge.  It must have been amazing experience completing a half marathon in such an extreme location: just the sort of challenge which Precky would applaud. As a token of appreciation Peter has been presented with a Heritage polo shirt by the SPF Trustees.

The SPF is very proud of the legacy left by Steve Prescott and the inspiration he gives to people to support his chosen charities.  The donations to the SPF go to support The Christie in Manchester, the Rugby League Benevolent Fund and the SPF Special Causes Fund. The SPF fund allows those hospitals, researchers and surgeons who deal in Pseudomyxoma related conditions and multi visceral transplantation to apply for grants to the Trustees of the SPF who will ensure sure that the money will have a direct and significant effect on people's lives.