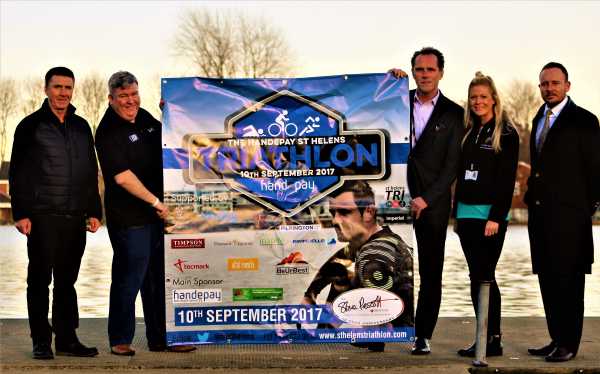 On the 10th September 2017, the Steve Prescott Foundation (SPF) will host the Handepay St Helens Triathlon.  The inaugural triathlon was held in 2015 when the SPF finally made Steve Prescott’s dream for a Triathlon in St Helens  become a reality.

We are delighted to continue with the amazing support of Handepay, a card processing company based in Haydock. The SPF is Handepay’s nominated charity and they have pledged to raise £20k over the course of the next 18 months. They raised over £13k in 2016 with a series of fund raising events including ‘The Grand Final Walk’ from their offices in Haydock to Old Trafford for the Rugby League Grand Final last October.

Andy Peake, managing director of Handepay, says: ‘It’s a pleasure to be able to continue to raise money and support the great work of the Steve Prescott Foundation. We are thrilled to be able to sponsor such a challenging local event that was Steve Prescott’s dream.’

St Helens Council Sports Development Officer Gemma Webster said. “The St Helens Triathlon is a fantastic event for local people to get fit, try something new and support a worthy cause.”

“Sports Development are currently working with British Triathlon and St Helens Tri club to develop a beginners' triathlon programme, culminating in a summer 'Go Tri' event. We are building on our successful Couch to 5k model, providing an opportunity to try the different elements and take part in a very short version, a great practise event before the St.Helens Triathlon!”

"Pheasant Equities are delighted to support The Steve Prescott Foundation in it's tenth anniversary year. We are so pleased to see Eccleston Mere being utilised for a community event that is now established in the Triathlon calendar."

The event has attracted over 200 participants from all over the UK in each of the first two years.

Martin Blondel, general manager of the SPF, has described the event as the hardest logistical challenge in the SPF’s history.

The event will start with an open water swim section at Eccleston Mere and will include Standard and Sprint triathlon distance. Team entries are also welcomed.

The cycle phase of the triathlon starts at Eccleston Mere and tackles the famous challenge of “Shaley Brow” into Orrell and back down past the Lancashire Manor Hotel through Crawford Village then into Rainford High School, who will host the second transition area.  The Olympic triathletes will head back out to Crank for another loop of the cycling course with the sprint triathletes setting out from the school onto a 5km course around Rainford.  On completion of the 25 mile bike ride the Olympic triathletes will attempt the Rainford 10k run course to finish the triathlon.

Open water swimming training at Eccleston Mere is planned and will continue every Monday evening throughout the summer. Full changing facilities are available and a nominal fee will be charged. Profits from the training will go to the Steve Prescott Foundation. Terry Bates from Be Ur Best will offer all participants expert training that will make sure they are ready for the event.

The SPF would also like offer sincere thanks to Handepay for their sponsorship and to Terry Bates (Be Ur Best) and Tecmark for their support and advice.

There are several sponsorship opportunities available for local companies to support the St Helens Triathlon. For   further details contact Martin Blondel on 07971792859

You can register for The Handepay St Helens Triathlon 2017 at www.sthelenstriathlon.com