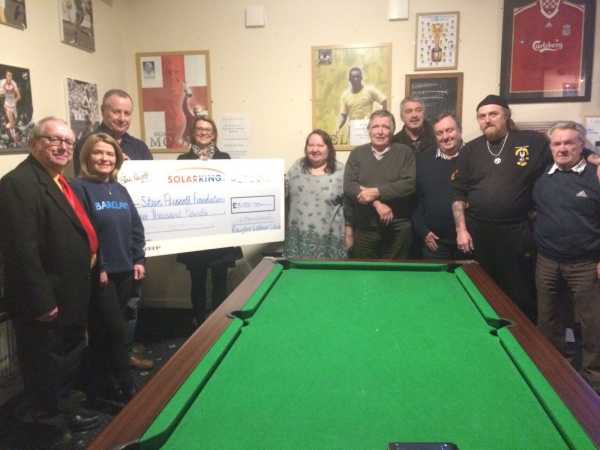 Rainford Labour Club organised a fund raising in aid of the Steve Prescott Foundation in memory of John Fairclough  who was a retired customs & excise officer based at Manchester Airport and a former chairman of Rainford Labour Club. He was also Saints season ticket holder for many years. John was a well liked man who did so much for the community. John very sadly passed away after a short illness of lung disease on 22nd Feb 2015, age 61. John is survived by his daughter Becky, brothers Brian, Mark and Simon and sister Joan.

One of the event organisers Jeanie Rosbotham was successful in securing £1000 worth in matched funding by from Barclays Bank.

Jeanie says, "After John's death his family and friends decided to organise a fund raising night in his memory. They chose the SPF as the charity because of John's love of rugby league and St Helens rugby league club. John was also a great fan of "Precky " during his playing days at Saints. He was amazed at what Steve achieved during his illness with his fund raising efforts and establishing the SPF.’’

John’s brothers Mark and Simon Fairclough raffled a signed Saints shirt at work "unifax" in Rainford raising £370 . On 1st Aug 2015 Rainford Labour Club ran by a very enjoyable social evening  in memory of John, attended by 80  family and friends. Raffles and auctions of prizes donated by local businesses raised a fantastic £1670 . Entertainment was provided by singer Susan Jay and her husband Dave and Terryoke who all donated their time free of charge.

At the fundraiser the MP for St Helens North, Conor McGinn unveiled a plaque and named the club function room The John Fairclough suite as a tribute to all the hard work he put in to make the club a success.

The fundraisers from Rainford Labour club formally presented a cheque for £3000 to Steve’s wife and SPF Trustee Linzi recently. The SPF is extremely grateful to the Rainford Labour Club and John’s family for paying such a wonderful tribute to their former chairman John Fairclough and for nominating the SPF as their chosen charity. The funds raised really do make a difference to people’s lives.