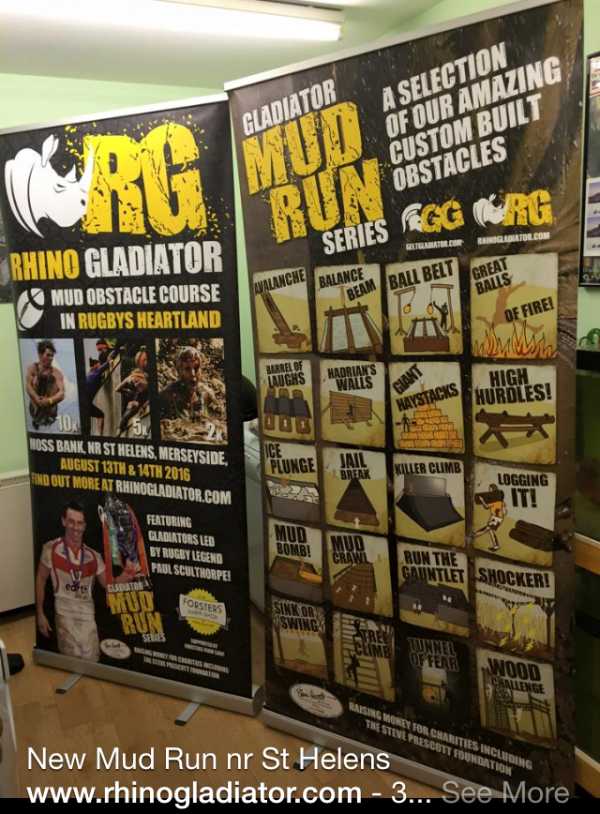 The Steve Prescott Foundation is delighted to form a partnership with Endurance Sports headed up by director Mike James in the inaugural St Helens Rhino Gladiator event this summer.

A team of Rugby League legends will be taking on the public of St Helens in an exciting new mud run event. Paul Sculthorpe MBE, former Wigan star Wayne Godwin, retired Salford Red Devils and Warrington captain Adrian Morley, former Leeds Rhino prop Ewan Dowes and former Great Britain internationals Garreth Carvell and Keith Senior are just a few of the stars confirmed to get down and dirty as part of the event on 13th and 14th August 2016 at Shoots Delph Farm, Moss Bank.

Rhino Gladiator will feature 10k, 5k and family-friendly 2k challenges; the fun two-day event will be suitable for a variety of ages and abilities.

Martin Blondel of the SPF said. ‘ It’s a real pleasure to support our friends at Forsters’ Farm Shop who are hosting this event and SPF ambassador and Rhino director Paul Sculthorpe in this new venture. Mike James of Endurance Sports has enormous experience in event organisation and we hope that SPF supporters will take on this new challenge.’

Event director, Mike James of Endurance Sports, has a wealth of experience organising large scale race events Having been involved in Glasgow Green Road Events at Glasgow 2014 Commonwealth Games and The Rock 'n' Roll Liverpool Marathon and Half Marathon.

Mike said: “I’m so pleased to announce this amazing line-up of rugby league legends to join Paul Sculthorpe for the first Rhino Gladiator in St Helens this summer.

“The Gladiator Mud Run Series events are about challenging yourself and having fun with your friends, rather than being purely competitive. It is a challenge not a race and suitable for any ability as many walk the course just for fun and not to be the quickest in the field.

“The RG 2k is ideal for family fun, the RG 5k is perfect for those new to mud events and the RG 10k is the ultimate test of stamina - there really is a race for everyone.”

As well as enduring a range of challenging obstacles and plenty of mud, runners will also find themselves taking on a team of Rhino Gladiators, headed up by former St Helens Rugby League star and Steve Prescott Foundation ambassador Paul Sculthorpe. Scully is the winner of four Grand Finals, three Challenge Cups and two World Club Challenges.

Paul said: “I’m proud to be leading the team of gladiators for the first Rhino Gladiator event this summer.

“Although there are elements that all of family can be a part of, the challenge for many taking part will be getting past me - and the rest of the rugby league legends that will be out in force for the event at Shoots Delph Farm.

“Not that we’re going to hurt anyone - we might even help out if you ask us nicely!

“Now I’m getting the Rhino Gladiator crew together it’s going to be interesting to see how many teams form that will be prepared to take us on.”

Located at various stages of the course, former Rugby League stars and some of the region’s fittest individuals will form the ultimate team of 20 gladiators, aimed to either help or hinder your progress.

Runners are encouraged to sign up as a team or an individual. There is 10% off for teams of 6 or more and places are booking up quickly so do not hesitate to sign up now to guarantee your place in this event.