Punters raise £1,000 for the Steve Prescott Foundation by buying a pint 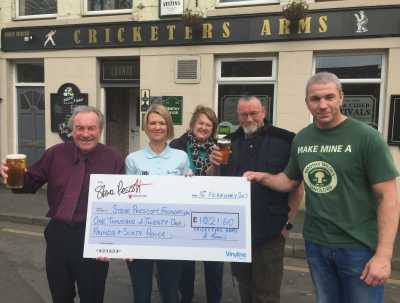 A PUB landlord is thanking his punters after they helped to raise more than £1,000 for the Steve Prescott Foundation by paying a few pence more for their pints.

Andy Evans, owner of the Cricketers Arms on Peters Street, raised £1,021.60 in under a year by adding 5p to the cost of the White Rat beer, popular with his regulars.

This amount want raised by pulling 19,944 pints and using 277 barrels of the beer, which was supplied by Huddersfield-based Ossett Brewery.

Andy said: “This is a really deserving charity we are proud to support them, we might have run it but the customers helped raise it.

“One of our regulars Graham Glover suggested about us raising the cost of one of our beers to raise money for the foundation.

“We jumped at the idea and all our customers were totally behind us, some especially bought that beer to help raise the amount.

“Regulars such as Sandy Gavin, Phil Maines and Dave Price have even paid extra towards the foundation on each of their pints, so they need a pat on the back for their help.

“This will be an ongoing thing now, we’ve already started raising funds again and will give it over when we reach another £1,000.” 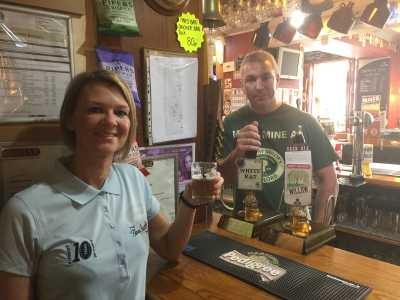 Steve Prescott’s widow Linzi was present to accept the cheque and try a sample of the popular pint.

She said: “I am overwhelmed by the support that Andy and his customers have given towards the Steve Prescott Foundation and that they will continue to do so.

“Their generosity is just amazing and the money raised will go towards helping people and saving lives.

“Support like this is fantastic and a great way to mark the 10 year anniversary of the foundation and proof of Steve’s legacy.”

The Cricketers Arms will also be hosting their beer festival from April 13 to 16 with funds raised going to the foundation.