New Lease of Life For Luke 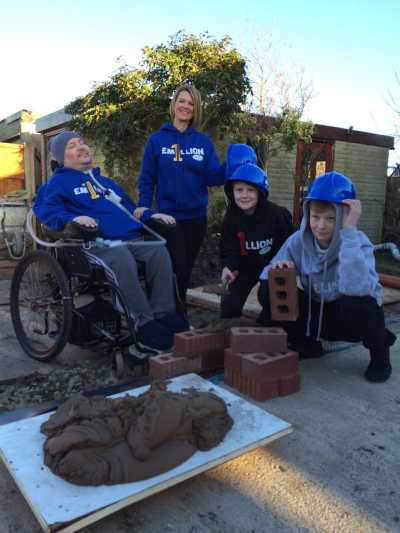 Linzi, Taylor and Koby Prescott were on hand to lay the first bricks at Luke’s new home.

Luke Bryan says his new home will give him the independence he craves and a new lease of life. The former rugby league player was paralysed from the neck down following a devastating injury in 1996 while playing for Haydock under 18s.

Luke, 36, currently lives in the extension of the family home on Clipsley Lane with mum Christine. He explained: “This will mean everything to me. I will also be able to look out on to a garden instead of a concrete base. I will be able to look out of the window and see my dogs playing. I moved into this house when I was 11 and had my accident at 17. This new place will be my home I will have my own kitchen and living room. I will have a bedroom and even office space. Everything here is in one room. I’ll be able to have my friends round. The carers will also be able to have their own room.

“This won’t be just a room, it will be a home. This will have environmental control and an intercom system. It will give me independence because I will be able to do things myself, things everybody else takes for granted.”

Luke said the move to the new house, which he hopes will be completed by early summer, will also enable him to study: “I will feel more alive and it will be a fresh start.”

View the report about Luke on ITV News

The path to Luke’s new home grew from his friendship with Steve Prescott.

“I want to thank all associated with the RL Benevolent Fund and the Steve Prescott Foundation for making this happen, Steve was a good friend of mine and he promised that he would do everything he could to give me the opportunity to look out of a window instead of four walls”

Martin Blondel from the SPF said Steve was determined to help after visiting Luke at home. Martin said: “Steve will be looking down and will be overjoyed that we have been able to support the Benevolent Fund and finally get Luke in to a home that will have everything he needs to lead as relatively normal life as possible.

It is so important that people continue to support The Steve Prescott Foundation in our Million Pound year and beyond.

“We are continuing Steve’s legacy and making a difference to so many people’s lives, not only with Luke Bryan but also with the great work that is being carried out by The Christie and SPF Special Causes fund.”

View the report about Luke on ITV News