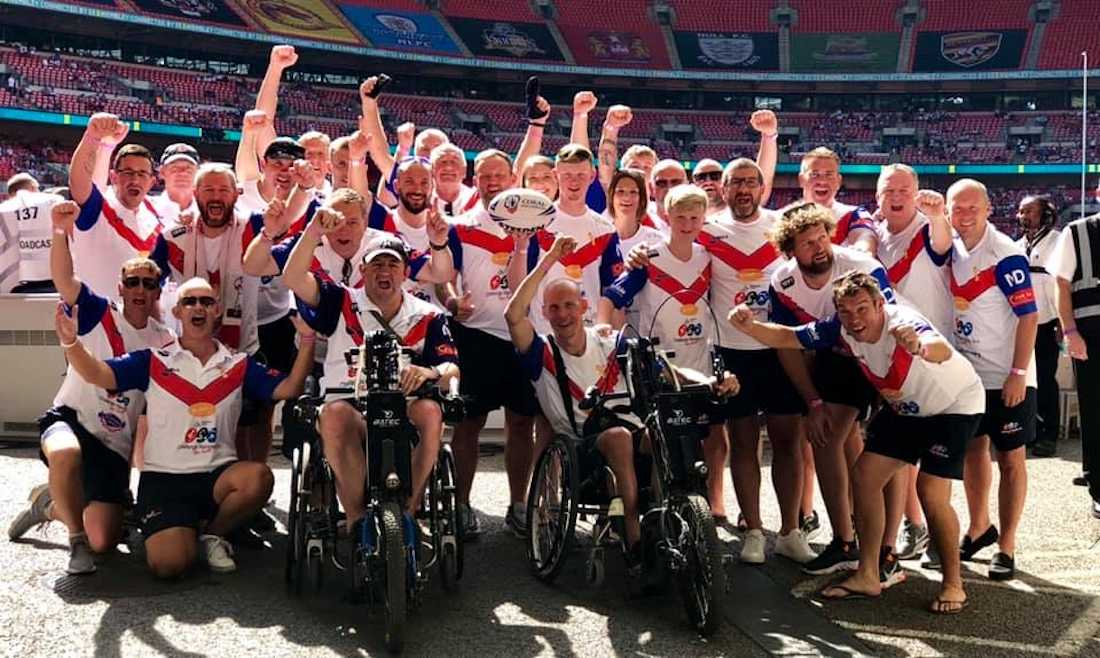 The SPF donation is the culmination of the amazing fundraising and donations from supporters and sponsors for SPF events during 2019 including the Challenge Wembley cycling event, the Grand Canyon Trek, the Lol Pennington Memorial Bowls event and the St Helens 10k run.

The RFL Benevolent Fund has received £611,880 in donations from the SPF since its inception in 2007.  The RFL Benevolent Fund is a charity that provides assistance to players, and the family of players who have suffered life-changing injuries playing Rugby League. It also provides support and advice to players who receive diagnosis of severe illness.

While we all digest the news about the legend Rob Burrow’s diagnosis of Motor Neurone Disease its times like this that the RFL Benevolent Fund use their wealth of experience and are there to support Rob and his family along with the outpouring of support from the whole rugby league family.

Mike Denning, Chair of the SPF says. ‘It’s such terribly sad news about Rob Burrow and we at the SPF will do all we can to support Rob and his family. To date the SPF has donated over £600,000 to the RFL Benevolent Fund which has helped and continues to help many people. There have sadly been several cases like Rob’s which go under the radar and need our support. Let’s keep helping those who need our help at these sad times.’

Steve Ball General Manager of the RFL Benevolent Fund said “The support of the Steve Prescott Foundation has been immense and plays an integral part in the Rugby League Community. Unfortunately this year we have supported five new families of rugby league people who have passed away, Annual contributions from the SPF continue to support and underpin the work of the RL Benevolent Fund.

The SPF also give past players and RFL beneficiaries the opportunity to go out and test themselves in the most challenging places, it was great to see Pete Stephenson and Jimmy Gittins join Taylor Prescott in the Paramount Digital Challenge Wembley in August. We look forward to the SPF events in 2020.’

Donations to the SPF received during 2019 are inspired by Steve Prescott MBE who passed away in November 2013. Steve played rugby league for St Helens, Hull FC and Wakefield Trinity Wildcats and was a Great Britain and Ireland international.

Steve was diagnosed with a rare abdominal cancer, pseudomyxoma peritonei (PMP) in 2006 and formed the SPF in 2007 to raise awareness and funds for the RFL Benevolent Fund and The Christie in Manchester. Steve undertook many physically and mentally exhausting challenges during his illness to raise funds and awareness of the charities close to his heart.  In October 2013 he underwent a pioneering multi visceral transplant of the small bowel, pancreas, duodenum and abdominal wall at the Oxford Transplant Unit and although this procedure eradicated the cancer Steve passed away a few weeks later due to complications of surgery.

Linzi Prescott said. ‘We are delighted to continue to support The RFL Benevolent Fund. The SPF is so grateful to all the people who have completed challenges for us this year and for all the donations we have received. It really does make a difference to people’s lives.’’

This year, the SPF is donating a significant sum to The Christie, the RFL Benevolent Fund and the SPF Special Causes Fund as a result of donations received during the year.

SPF fundraising challenges for 2020 include the GPW Recruitment St Helens 10k Run on Sunday 1st March, the Kilimanjaro trek in March, the Tower to Tower Cycling Challenge in June, the Yorkshire Three Peaks challenge in September and the Machu Picchu and Rainbow Mountains trek in October.