41 volunteer trekkers raise over £200k for the SPF Charity 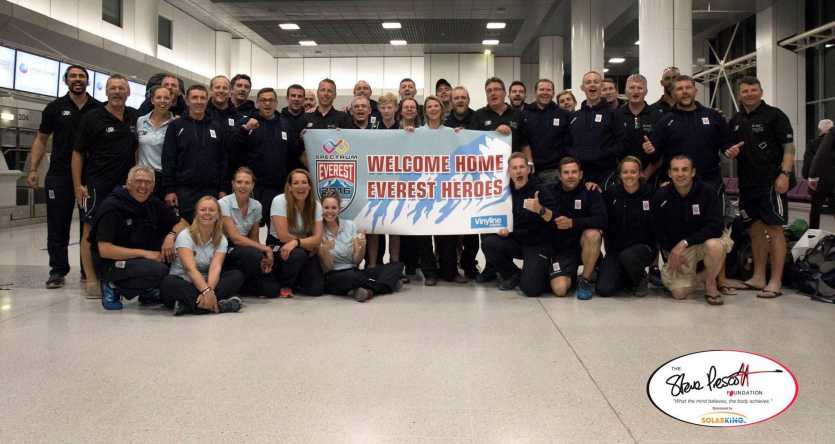 A party of 41 volunteer trekkers have safely achieved their objective of climbing to the Nepal Everest Base Camp and have raised an amazing £200k for the Steve Prescott Foundation (SPF) in the process.

Team leader Steve Prescott Foundation (SPF) Trustee Adrian Cunliffe posted on Facebook: “ #Everest4Precky  COMPLETE . All 41 made it to Everest Basecamp yesterday. Gruelling 12 hr day in freezing conditions. The SPF flag flew proudly. Hard to put into words, the emotions every single member feels. THEN today, we were up at 4:30am and started our climb up Kala Pattar at 5am. Brutal ascent in freezing conditions. Took 5 hours to get up and down, but the reward of Everest was magical. Again the SPF flag flew high & proud. We now have to walk around 7hrs to our  next  accommodation so back to back 12hr days.”

“Thanks to you all for messages of support, please keep them coming for all the team, it's a highlight of our day getting to read them.”

“The team has raised over £200k and still rising.”What the mind believes, the body achieves" - 41 people achieved!”

Messages of support and praise also came flooding in for the team across social media platforms. A number of rugby league clubs tweeted their support including Warrington Wolves, Leeds Rhinos and Hull FC.

Super Middleweight boxer Martin Murray wrote: “Well done to you and the team and @AdeCunliffeSPF. The great man @StevePrescott1 will be proud.”

The party flew to Kathmandu and then faced an eleven day trek from Lukla to Nepal Everest Base Camp and then continued to "Kala Pattar" to reach a finishing height of 5645 meters above sea level.

The party were welcomed back home at Manchester airport last Friday by SPF Chairman Mike Denning and SPF Trustee and former St Helens Rugby league International Tommy Martin. Each member was presented with a certificate of achievement and commemorative medal.

2016 is a milestone year for the Steve Prescott Foundation (SPF) as it has reached a million pounds of donations to its nominated charities; the Rugby League Benevolent Fund, The Christie and the SPF Special Causes Fund.

The SPF is a St Helens based charity which is the legacy of Steve Prescott MBE who passed away in November 2013. Steve played for St Helens, Hull FC, and Wakefield Trinity Wildcats and was a Great Britain and Ireland international. Steve was diagnosed with a rare abdominal cancer, pseudomyxoma peritonei (PMP) in 2006 and formed the SPF in 2007 to raise funds for and awareness of the Rugby League Benevolent Fund and The Christie in Manchester.  In October 2013 Steve underwent a pioneering multi visceral transplant at the Oxford Transplant Unit and although the procedure eradicated the cancer Steve passed away a few weeks later due to complications of surgery.

Sincere thanks to the Spectrum Group for their fantastic support and to all the companies who have sponsored the trekkers and to everyone who has made donations to their fund raising pages.

Donations can be made to:   www.justgiving.com/teams/ebc2016