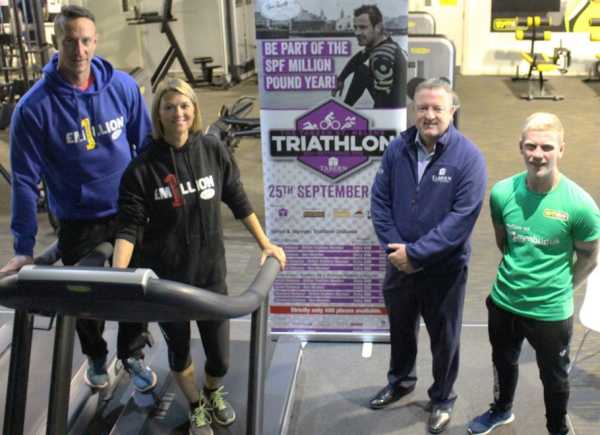 The Steve Prescott Foundation is delighted to announce an association with GymBUG St Helens as they support two of the SPF flag ship events, the St Helens 10k and the St Helens Triathlon.

GymBUG are also supporting Linzi Prescott and her son Taylor by offering free membership with personal training from Mark Hunt as they prepare for the Spectrum Everest Basecamp Challenge. SPF trustee Linzi and  Taylor are part of a 40 strong party who set off in October on an eleven day climbing expedition. In their quest to achieve peak fitness for the event Linzi and Taylor have  the full support of Mark and the GymBUG facilities. Mark is also the Health and Wellbeing correspondent for the St Helens Star.

Linzi says” I cannot thank Paul Turner and GymBUG enough for their fantastic support of the SPF. I feel very lucky that Mark Hunt has offered me and Taylor his expertise, advice and encouragement in helping us prepare for the Everest BC challenge. After only working with him for 1 week, I already feel more confident about what lies ahead.”

GymBUG are also supporting the SPF by offering a free 2 day pass for all 200 participants of the Tabern St Helens Triathlon which takes place on Sunday 25th September starting at Eccleston Mere and finishes at Rainford High School. GymBUG  is also very generously providing prizes for the men’s and women’s Sprint and Standard competitions where the winners will receive a 3 month pass, the runners up a 2 month pass and he third placed athletes a one month pass.

The SPF are delighted to receive such fantastic support of Paul Turner GymBUG St Helens Manager and the premier leisure facilities they offer.  Their support is invaluable in support of two events inspired by Steve Prescott’s quest to encourage people to challenge themselves to improve their health and fitness.