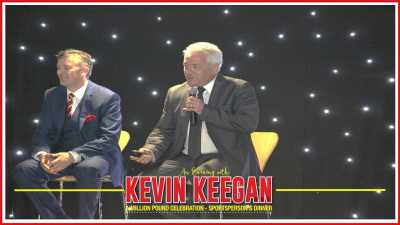 The Steve Prescott Foundation celebrated the milestone of £Million of donations by hosting a dinner at Langtree Park, St Helens last Friday. Special guest was Liverpool FC and England legend Kevin Keegan OBE, who gave a terrific presentation which featured memories from his career and football anecdotes. Steve Prescott was a huge Liverpool FC fan and Kevin Keegan was his hero, so it was really fitting to have Kevin present on such a special occasion.

The evening was to celebrate the legacy of Steve Prescott MBE and the milestone of £Million of donations to the Rugby League Benevolent Fund, the Christie and the SPF Special Causes Funds. It is evident that these donations really do make a difference to people lives.

The celebration was attended by the Prescott family and friends, SPF ambassadors, sponsors, committee and supporters. The compère for the occasion was Pete Emmett with entertainment from Britain's Got Talent finalist comedian Leslie Gibson.

A vote of thanks were given by Linzi Prescott.

Events planned for the year are the Tabern St Helens Triathlon on 25th September and the Spectrum Everest Base Camp Challenge in October when 40 climbers including Linzi and Taylor Prescott set off to conquer Everest.

View pictures from the evening here