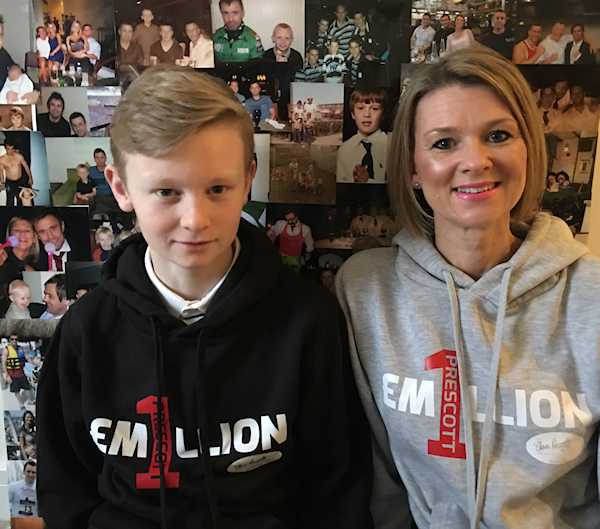 Linzi Prescott said “I really cannot believe that I have signed up for this challenge. I am nervous but incredibly excited. Over the years I have witnessed Stephen push his body to the absolute limits, now it is my turn. This year is our milestone year of passing the million pound in donations to our nominated charities Try Assist, The Christie and the SPF Causes Fund! The charity has gone from strength to strength, we really are making a huge difference to people’s lives. This inspires me to continue Stephen’s legacy.

As soon as Taylor heard about the Spectrum Everest Base Camp Event, he wanted to take this challenge on! He takes after his dad in so many ways and when it was possible for Taylor to take part, I had no option but to go with him.

In 2010 Stephen had a meeting with Carnegie University about tackling Everest Base Camp, unfortunately this never transpired. Stephen would not ask anyone to do anything unless he was prepared to do the same! I hope by taking part in this challenge I will inspire others to take part in all the great events we have lined up for 2016 and support the SPF”

Taylor Prescott who is playing football for Liverpool Academy Under 14s said “I am really honoured to have the chance to climb to Everest Base Camp for my dad’s charity and follow in his footsteps. It will be a fantastic opportunity and will give me a once in a lifetime experience. I would like to thank everybody who will be joining my mum and I on this challenge. When I was growing up and seeing my dad’s achievements, I told him that one day I would do challenges with him to support the charity. That has not changed since he has been taken away and I am more determined to do what I can to continue his legacy and make him proud.”

The Everest Base Camp Challenge 2016 sponsored by the Manchester based Spectrum Group, a leading supplier of support services in the industrial sector follows on from the fantastic success of the Spectrum Kilimanjaro Challenge of 2015 which raised over £150,000 for the SPF.

Emmerdale’s Mike Parr said ‘We will try and raise as much money as possible by climbing the biggest mountain in the world. It’s going to be challenging but hopefully the money we raise will change people’s lives. It is a great privilege to be taking part with Linzi & Taylor, when I heard the news it sent shivers down my spine!’ Each of the climbers agrees to raise minimum of £4500 for the SPF. Some of the ladies who successfully conquered Kilimanjaro have also signed up for the trek including Jenna Brough, Janet Caldwell and Hayley Russell.

To sponsor Linzi & Taylor on this incredible challenge please go to https://www.justgiving.com/LinziTaylor/