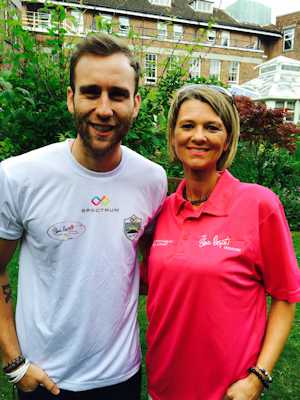 My name's Matthew Lewis and along with my mate Nick, and against our better judgement, we have decided to climb a mountain and we need YOUR help...

Both Nick and I are big Rugby League fans and we've followed our team the Leeds Rhinos for many years. Rugby League however is more than just club loyalties and tribalism. It's a social sport, a game that brings communities together instead of dividing them, for want of a better word, it's a family. And nobody sums that mentality up more than Steve Prescott.

There are four words in particular that described Stephen Prescott: competitive, resilient, courageous and inspirational. These qualities were prevalent throughout his life, in which sport played a dominant role. To reach the top in Rugby League like Steve did, a fiercely competitive attitude is needed, together with great self-belief and courage. Stephen also had to overcome several set-backs during his sporting career and, in the face of terminal illness, he showed terrific courage and has become an inspirational figure to thousands, not just within the Rugby League community itself.

It was Steve's plan to scale this beast of a mountain, to be literally on top of the world. But, being Steve, doing it in NINE days was too easy, nah, Steve wanted to do it in FIVE. Three days up and two days down. Sadly, Steve passed away before he could achieve this feat so, we're gonna take up his mantle and do it on his behalf.

Oh, and in honour of Steve's spectacular career we're gonna break a world record whist we are up there too. The highest Rugby League game in the history of mankind.... EVER! A full 80 minute, RFL officiated Rugby League match at 20,000ft. We've even dragged ex-professional referee Steve Ganson up with us to do the honours. With his best pal Adrian Morley. What could possibly go wrong?

Now, this is where YOU come in! Nick and I have to raise £8000 for the trip. It's a daunting task and it's probably going to be easier climbing the bloody mountain than it will raising the money but every little helps. Anything you can spare will go towards this fantastic cause. With your help and a sprinkle of Steve's enduring legacy and mentality we might just achieve this and get up that mountain.

You can sponsor us here https://www.justgiving.com/MattandNickMtK/

Click here to find out more about our challenge