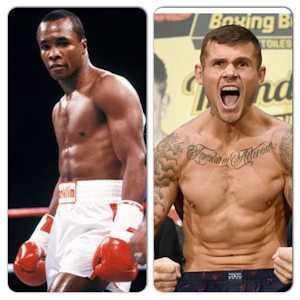 In just a few weeks time boxing icon Sugar Ray Leonard will be winging his way to St Helens for what promises to be a knockout event. Hundreds of people are expected to descend on Sutton Leisure Centre, on March 22nd, to listen to the legendary fighter who won an unprecedented 5 World titles at 5 different weights.

There’s a double treat for the guests, in the shape of local hero Martin Murray, who will also be a guest speaker for this once in a lifetime event. Fresh from his epic battle with Gennady Golovkin, the boxer is sure to get a heroes welcome. He did the town proud with a trademark display of sheer guts and determination before succumbing to the Kazakh fighter, widely regarded as the hottest property in the sport, with an eleventh round stoppage.

Both fighters will be interviewed by a familiar face, St Helens compere, Pete Emmett. The Yorkshire based speaker has been entertaining guests at Langtree Park for the past 3 years and is an avid supporter of The Steve Prescott Foundation.

Emmett said, “I’ve had the privilege of interviewing Sugar Ray Leonard before and anybody who comes along is in for a treat. He loves a bit of banter and is great fun. The insight into his mind games for the infamous fights with Roberto Duran, Marvin Hagler and Thomas Hearns is really fascinating and the punters will not be disappointed”. Emmett has interviewed many boxing stars, including Mike Tyson, Frank Bruno, David Haye, Nigel Benn, Steve Collins and Glenn McCrory to name a few, however, without doubt his favourite is Sugar Ray. “He’s such an interesting character and his life story is a real roller coaster ride. As well as being a huge sporting icon he is a charming man and very charismatic”.

Murray’s attendance should ensure a bumper crowd, Emmett adding, “Having Martin on the top table seems appropriate for this event, he epitomises the spirit of the late great Steve Prescott. A courageous warrior with the heart of a lion”.