Linzi joins up with Radcliffe Team 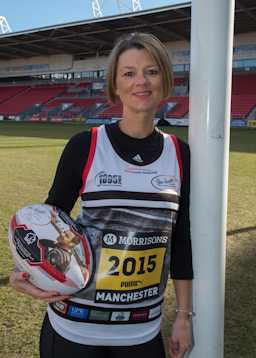 Linzi is taking part in the Morrisons Great Manchester Run on Sunday, May 10, in aid of the Steve Prescott Foundation, established in the name of her husband who played for St Helens, Hull and Wakefield.

The mum-of-two showed great courage with her support during Steve's seven-year struggle against a rare form of abdomen cancer before he died in November 2013. Amazingly, he carried out a series of gruelling sporting challenges despite his illness, raising funds for the charity.

More than £700,000 has already been donated so far and Linzi is hoping the high-profile help of Paula Radcliffe will take the total closer to the £1m target.

As one of six 'Radcliffe's Great Runners', Linzi will get training advice from the marathon world record holder and a final pep talk on race day.

Linzi said: "There isn't a sporting bone in my body and running doesn't come naturally to me. However, Stephen put us all to shame with what he did when he was seriously ill so there's no excuses.

"I think about him through every mile in training and he gives me the boost to carry on. I'm sure he'll be looking down on me when I do the Morrisons Great Manchester Run."

Paula said: "I'm delighted that Linzi's going to be part of my team. She's such a special person, having shown such strength and spirit over several years during Steve's terrible illness.

"I'm sure Linzi will inspire all those running for the Steve Prescott Foundation to raise as much as they can. It's one of dozens of charities which will benefit from much-needed sponsorship raised by up to 40,000 people in the Morrisons Great Manchester Run."

Linzi will warm up for the Manchester Run by taking part in a 10k in her home town of St Helens on March 8, an event set up by her husband.

* The Morrisons Great Manchester Run takes place on Sunday, May 10. To find out more and enter go to www.greatrun.org.

To sponsor Linzi go to www.justgiving.com/LinziPrescott or simply text the word honk90 to 70070