Steve Prescott MBE Forum – One in a Million Book Launch 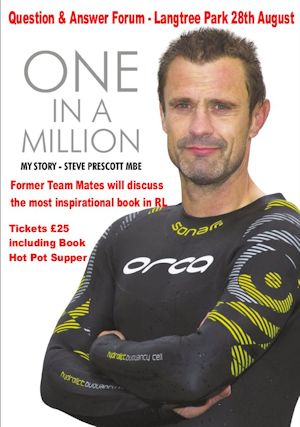 Collect tickets at Main Reception prior to start

One in a Million - the autobiography of Rugby League legend Steve Prescott will take centre stage at Langtree Park on Thursday 28th August. Former Team mates of the inspirational full back will go through anecdotes of their times spent with Steve.

All guests will receive a copy of “One in a million!” signed by the guests of the evening along with Hot Pot for an inclusive price of £25.

Prescott, the former St Helens, Hull FC, Wakefield Trinity Wildcats, Lancashire, England and Ireland full-back, began writing his life story in 2007 while battling cancer and had completed the manuscript a few weeks before he passed away in November after complications from a multi-organ transplant.

His wife Linzi has written the final two heart-rending chapters of a book which, for the first time, will tell the whole story of Steve’s brave battle with cancer.

In the book Steve describes growing up in St Helens, dealing with early rejection before signing for his home-town team and the highs and lows of top level Rugby League.

Although Steve writes colourfully about the ups and the downs of his career in the game, One in a Million is much more than a sports book, with much space devoted to the way he tested himself and inspired others with a series of gruelling challenges.

Linzi said: “At first Stephen just wanted to tell his story after being diagnosed with cancer, but in the end it became so personal to him that he decided to tell the people what he was really going through behind closed doors, and that it wasn't all about endurance challenges and smiling.

“He is very open and honest about what he went through. He really enjoyed writing it and he put a lot of time and effort into it.

“During his last course of chemotherapy at The Christie, he used the treatment time to work on his book, edit it and make sure he was getting it right - and it helped him take his mind off what he was going through at that time.

“He worked on the book from 2007 and was extremely passionate about it in the end; he really wanted to tell his own story and wanted to make sure people got it from him.

“It is certainly not a normal sporting book, it is the whole picture. As well as his rugby career, it will tell the readers in detail what he has been through from the diagnosis in 2006 through to the pioneering transplant in 2013.

“It is a very personal book, told in his words, which people will see as soon as they read it - they will hear Stephen's voice.

“There are funny stories from his rugby days in there too – Stephen was always a positive person so there is a lot of positivity in the book, but it is also sincere and emotional as well.”

Written with the assistance of sports journalist Mike Critchley, One in a Million is published by Vertical Editions, to book your place for the forum that Steve will be remembered, you can purchase tickets online www.spfund.co.uk or purchase tickets from St Helens RFC.

Anybody who has already pre-ordered the book can purchase a ticket for £10, see separate product listing (All proceeds from the book go to the SP Fund which has been set up for the family of the late Steve Prescott MBE).

Any tickets bought online will be collected at the door on the 28th August.