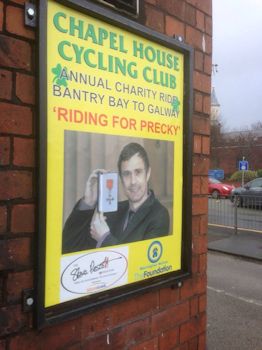 The Chapel House Cycling Club began with a charity event that was held in August 2011. Over two days, a group of lads from Great Sankey got together to raise money for The Warrington Wolves Foundation by riding from the Cumbrian coast to the east coast of Northumbria.

The event was such a success that in June 2012, the group staged another coast to coast ride, in Ireland. By this time the group had grown in numbers and that year there were 38 cyclists including Marie and Ruth on a Tandem! We started in Dublin and over two days rode across the country to the city of Galway in the process raising £10,000 for St Rocco's Hospice and the Warrington Wolves foundation.

Last year our Charity Ride took place over the Bank Holiday weekend at the end of May which started in Cork and finished in Galway, with an overnight stay in Kilarney then onto Lahinch and finally Galway. It was a great success and again our numbers had increased to 50 riders. We raised over £12,000 for our four chosen charities, St Rocco's, Warrington Wolves Foundation, Camsey Riding School for the Disabled and Clumber Lodge Children's home.

They are well known in Galway, so much so that some of the local businesses help us with our sponsorship. Also several of our Irish friends joined us in 2012, riding in memory of Jarlaith MacInerney a well known solicitor, and have expressed a wish to join in this year meeting us on route.

They have chosen to use the same bank Holiday weekend and again flying into Cork, but to add interest to the ride we will be starting the ride in Bantry Bay. They have two support vans for transporting the bikes over to Ireland which local firms donate the use of, free of charge.

They have decided to support Warrington Wolves Foundation and The Steve Prescott Foundation as our chosen charities for the ride, and will be making signs to post on the vans showing the logos.

Any colleagues/friends, ex players that are up to the challenge they would be more than welcome to join us. I have attached the schedule of this years ride so if there is anyone interested they can give Paul a ring on 07769536622 They have a web page www.chapelhousecyclingclub.co.uk also a facebook page, there are some good photographs, everyone enjoying the 'craic' as they say in Ireland.