Linzi said "Stephen has inspired us, non runners, to put on our running shoes after watching how he pushed his body to the limits, by completing endurance challenges, whilst suffering from terminal cancer to raise over half a million pounds for the charity he set up 'The Steve Prescott Foundation.'

In October 2013, Stephen underwent a pioneering 'first in the world' modified multi-visceral transplant, including his stomach, pancreas, small intestine and abdominal wall, at The Churchill Hospital in Oxford in an attempt to get rid of the tumour and give him a better quality of life. Unfortunately, despite the optimism immediately after the 32 hour operation, we did not get the successful outcome everybody involved desperately hoped for and 3 weeks later Stephen passed away due to complications following the transplant.

Oxford will always have a very special place in out hearts, especially Linzi's, as this is where they shared the last 4 months of Stephen's life together. It was also the place which gave Stephen hope, a lifeline, when every other option was closed.

The anniversary of Stephen's surgery is October 15-17, just days after the event. We couldn't think of a more fitting place to motivate us to complete a half marathon.  We will be taking part as a team of 8, all close friends and family, as part of 'Team Precky' to raise funds and awareness for The Steve Prescott Foundation which in turn supports The Christie, Try Assist and now The Oxford Transplant Foundation (Churchill Hospital) to show our appreciation for all the expertise and care they dedicated to Stephen.

Please show us your support as we have all trained very hard! It's going to be an emotional day, but one we are sure that Stephen will be with us and inspiring us all the way round."

Please show your support by donating to https://www.justgiving.com/PreckyRunners 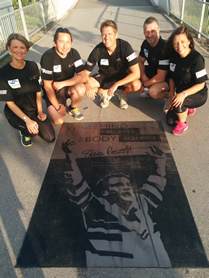