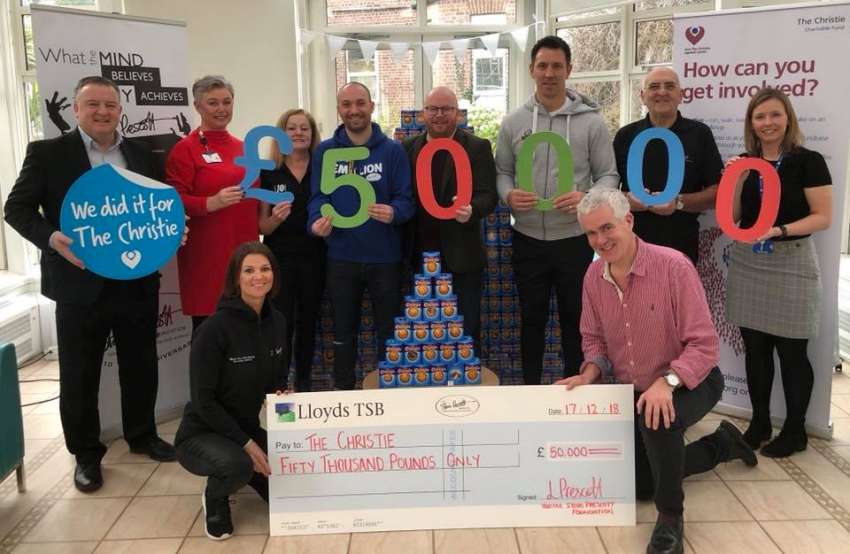 The donation is the culmination of the amazing fund raising and donations from supporters and from SPF events including the Everest Base Camp Challenge, the Race Across Europe Cycling Challenge and the St Helens 10k run. Donations to the SPF received during 2018 are inspired by Steve Prescott MBE who passed away in November 2013. Steve played rugby league for St Helens, Hull FC and Wakefield Trinity Wildcats and was a Great Britain and Ireland international.

Steve was diagnosed with a rare abdominal cancer, pseudomyxoma peritonei (PMP) in 2006 and formed the SPF in 2007 to raise funds for and awareness of the Rugby League Benevolent Fund and The Christie in Manchester. Steve undertook many physically and mentally exhausting challenges during his illness to raise funds and awareness of the charities close to his heart. In October 2013 he underwent a pioneering multi visceral transplant of the small bowel, pancreas, duodenum and abdominal wall at the Oxford Transplant Unit and although this procedure eradicated the cancer Steve passed away a few weeks later due to complications of surgery.

The Christie has received over half a million pounds in donations from the SPF since its inception in 2007.

Linzi Prescott said. ‘We are delighted to continue to support The Christie including their research programme for Pseudomyxoma related conditions. The SPF is so grateful to all the people who have completed challenges for us this year and for all the donations we have received. It really does make a difference to people’s lives.’’

This year, SPF is donating in excess of £150k to The Christie, the Rugby League Benevolent Fund and the SPF Special Causes Fund as a result of donations received during the year.

SPF fund raising challenges for 2019 include the GPW Recruitment St Helens 10k Run on Sunday 10th March, recreating the Wembley Challenge (10 year anniversary of the Carnegie Challenge) in August, Kilimanjaro in Sept and the Grand Canyon Trek in October. More details on how you can take part and continue the great man’s legacy will be announced this week.