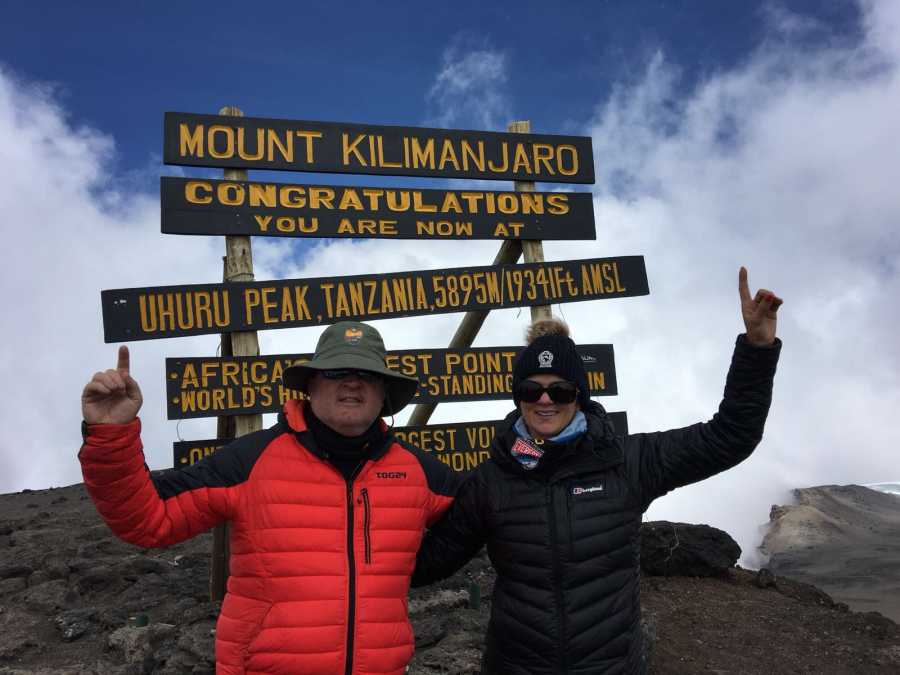 Unfortunately due to adverse weather conditions their attempt to play the Highest altitude game of football had to be cancelled due to severe snow storms in the crater on Kilimanjaro.

Mike Denning Chairman of the SPF said “The pitch for the match was all marked out in the crater and the goal posts were erected. The team had their football strips on and were ready and excited to play. The weather changed dramatically and we waited to see if it improved enough so there was visibility to play but the referee made the decision to cancel the game as players safety was paramount”

It was a monumental effort by all the SPF trekkers who battled against the elements to summit Kilimanjaro in the treacherous conditions. Several of the team experienced altitude sickness as all the climbers pushed their bodies to the limit as their individual fitness and mental stamina at high altitude was tested.

Linzi Prescott said. ‘I am incredibly proud of each and every one who has taken on this challenge. I think the bounce back ability of the team was amazing, the fact that 40 of the team reached the summit is no mean feat. They are a fantastic team, who I'm sure have experienced some special, once in a lifetime memories. We are disappointed that we did not manage to play the game of football but sadly we cannot control the weather. For the team to conquer Kilimanjaro in the most horrendous conditions is a testament to their resolve and spirit. I cannot thank them enough for continuing Stephen's legacy. He would be so proud! Special thanks must also go to their partners/families for their support”

Jock Waugh Quote “We are so proud to be sponsoring this unique world record attempt, not only because it raises funds for three terrific charities but because it massively increases the exposure for the legacy projects of the Steve Prescott Foundation. I know this is a cause so close to the hearts of our own Mark Halsey and his family so we are delighted that he is leading the way for you-are-the-ref.com.”

SPF Ambassador Mark Halsey said “Due to the disappointment of the match being cancelled, we have spoken to the local community and it has been agreed that the YATR officials and I will officiate a local league match on Saturday Oct 21st in Tanzania. The SPF will donate the kits and match balls to the local football community in Moshi after the game. We have been informed that there is great excitement in the town for the match and the profile of the SPF and YATR.com will be raised in Africa continuing the legacy of both organisations”

Each climber has raised at least £5000 for the charities of the SPF, the Christie Hospital in Manchester and Try Assist (formerly the Rugby League Benevolent Fund) and to the SPF Special Causes Fund.

Donations can be made at  https://www.justgiving.com/companyteams/SPFKili2017

The team will now trek back down to their base at Honey Badger Lodge in Moshi for a well earned rest. They return to Manchester on Monday 23rd October.