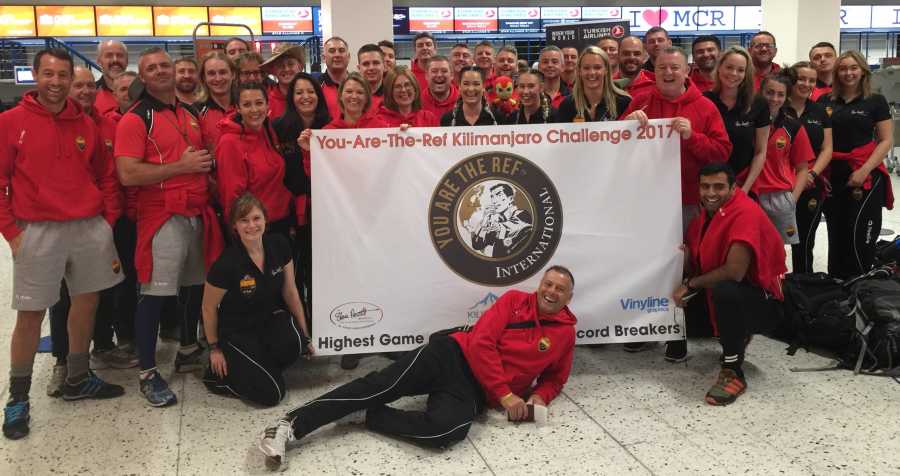 The you-are-the-ref.com Kilimanjaro Challenge climbing party left Manchester airport on Wednesday to start their journey to Tanzania via Istanbul. The team of 44 will not only be tackling Mount Kilimanjaro but will also attempt the Guinness Book of World Records highest altitude game of football. To achieve this goal they have the support of former Premier League referee and cancer survivor Mark Halsey and his referee assistants Mehdi Najefi, Paige Klum and Stuart McKenzie.

The latest epic challenge is to raise funds and awareness for the Steve Prescott Foundation (SPF) supporting The Christie Manchester, the Rugby League Benevolent Fund and the SPF Special Causes Fund.

All participants have been actively fund raising for months ahead of the challenge and will proudly fly the flag for their supporters when they reach the summit.

Martin Blondel, general manager of the SPF said, ‘Sincere thanks to event sponsors you-are-the-ref.com for their fantastic support. To achieve a Guinness World record we need the game to be officiated by a team of referees and are delighted that our friend Mark Halsey has taken up this challenge for the SPF. you-are-the-ref.com have sourced match officials from far and wide to support Mark.’

At 5895 metres (19,341 feet) tall, Mount Kilimanjaro is located in Tanzania, East Africa just south of the border with Kenya. It is the highest free-standing mountain in the world. It is a dormant volcano which last erupted 360,000 yrs ago

The event will involve eight days trekking via the Machame Route, also known as the Whisky Route. This route is said to be the most beautiful route. Accommodation on this route is in tents unlike the Marangu route used in previous trips which uses huts.

Since Steve’s pioneering surgery, several other people are benefitting from the same procedure and now have a much improved quality of life. Proof that the money the SPF raises, DOES save lives