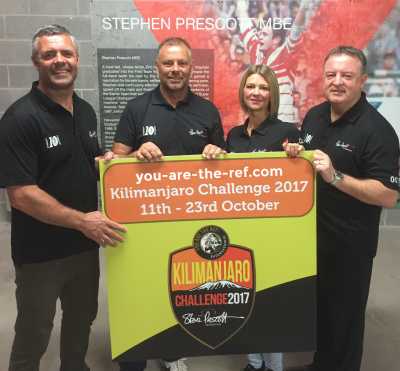 The game will be refereed by the former Premier League official and YATR Senior Coach Mark Halsey.

The epic challenge – in mid October - is to be undertaken to raise funds for The Christie Hospital in Manchester, the Rugby League Benevolent Fund and the SPF Special Causes Fund.

Steve Prescott MBE, who played for England, St Helens and Hull FC during an illustrious Rugby League career which spanned a decade, set up the Steve Prescott Foundation in 2007 after being diagnosed with a rare form of abdominal cancer. After raising almost £500,000, he died in 2013 at the age of just 39. The SPF has continued his astonishing legacy by passing the £1 Million mark in donations.

“We are elated to be taking a team up Kilimanjaro for what is a really ambitious challenge and who better to officiate the game than the team at You Are The Ref? I am looking forward to joining up with Mark and the rest of the team. Stephen loved his football and there is no better way to continue his legacy" said Linzi Prescott wife of Steve.