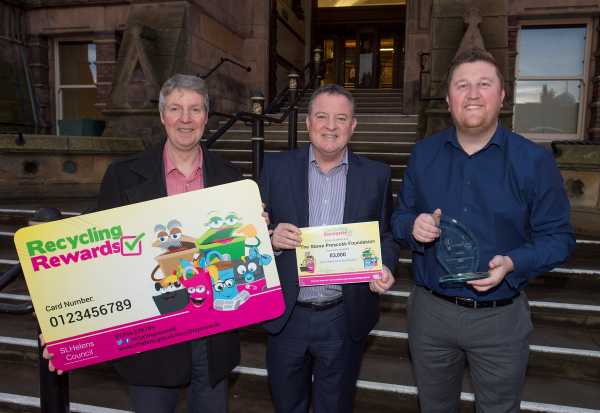 St Helens Recycling Rewards has raised £10,000 for four local charities who received their donations at the Town Hall on Wednesday 7th December, as part of a drive to encourage St Helens residents to waste less and recycle more.

During the last 12 months, members of the scheme have been voting for their favourite local charity, with Willowbrook Hospice winning the top prize of £5,000. Second favourite, the Steve Prescott Foundation won £3,000 and the two runners up, Honey Rose Foundation and The Hope Centre, were both awarded £1,000 each.

St Helens Recycling Rewards is a partnership initiative between St Helens Council and specialist provider, Local Green Points.  It has been running for a year now and already over 10,000 residents have signed up. Members earn points for their community for recycling - the more materials they save from the brown bin, the more points they earn. The communities with the most points per household have the biggest say over which local charity receives the largest donation and residents can vote any time for their favourite cause.

For the first 12 months, residents of West Park ward earned the most points, with Rainhill ward following close behind. Willowbrook Hospice received the most votes from residents  which bagged them £5,000 followed in second place by the Steve Prescott Foundation who were awarded a £3,000 donation.

Carol Pilkington, manager of Willowbrook Hospice was thrilled when she found out, commenting, “This is wonderful, just brilliant! This money will really help us care for adults with life-limiting illnesses in St Helens and Knowsley. And it’s come just in time for Christmas! This scheme isn’t just about the environment, it’s all about building happier and healthier communities.”

Mike Denning from the Steve Prescott Foundation said, “It’s really fantastic that we have received so much support through your innovative recycling scheme. The award will continue to raise the awareness of the SPF, and for that we’re very grateful.”

Councillor Seve Gomez-Aspron, cabinet member for Green, Smart & Sustainable Borough added, “After 12 months Recycling Rewards is going really well with the amount of recycling going up across St Helens and it’s great to see local charities benefitting from the recycling efforts of our residents.”

Local Green Points is an LLP company backed by Green Rewards, the UK’s leading supplier of sustainable rewards programmes.  The Company provides a range of services to local authorities that encourage waste reduction, recycling and reuse, and its local authority clients include the London Borough of Hackney, London Borough of Camden, London Borough of Bexley, The Royal Borough of Kingston upon Thames, Coventry City Council, St Helens Council, Westminster City Council and many more. Its parent company, Green Rewards, operates the workplace sustainability programme, JUMP, and its clients include RBS and Swansea University.