The Steve Prescott Foundation are elated to announce the first ever St Helens Triathlon will take place on September 13th . It is fair to say that this has been the hardest logistical challenge that the foundation has undertaken in its 8 year history.

Martin Blondel, General Manager of the SPF said “Steve and I have been working on the concept of a triathlon taking place in St Helens for over three year’s. Leading people within St Helens said it would not happen. It was Steve’s last wish. We could have easily opted for an indoor swim but Steve wanted in true SPF style for the triathlon to be a full test and this certainly is!”

There will be an Olympic and Sprint Triathlon available for entries. The swimming part of the Triathlon will take place at Eccleston Mere. Martin added “When Steve was alive he approached Eccleston Mere to host the swimming section. Unfortunately this was declined so we had to look at other venues. We had exhausted every avenue and fortunately Pheasant Equities bought the land including the lake and wanted the Mere to become part of the community! We are indebted to Pheasant Equities foresight. Without their vision and understanding we would not have been able to make Steve’s last wish come to fruition!”

The cycling part of the Triathlon will be a test for any triathlete. This will start from the Mere and head out over to Crank via the “Blue Bridge” past Cooks Farm. It will then tackle the famous “Shaley Brow” into Orrell and back down past Lancashire Manor Hotel through Crawford Village then into Rainford Hill School who will host the second transition area. The Olympic triathletes will head back out to Crank for another loop of the cycling course with the Sprint Triathletes setting out from the school onto a 5km course around Rainford. When the Olympic triathletes have completed the 25 miles bike ride they will attempt the Rainford 10k course to complete the Triathlon.

This event has been kindly sponsored by Nick Mussell from 02 Ormskirk. Nick said “We are delighted to support the St Helens Triathlon and Steve’s phenomenal legacy. As a keen triathlete I realise the importance of the St Helens Triathlon. It will be a fantastic test for all and fits in with SPF challenges of the past. We cannot wait for the 13th September. It is going to be amazing.”

St Helens RFC are also supporting the Triathlon and General Manager Dave Hutchinson said “We are keen to support all of the SPF initiatives; this is a natural progression from the 10k Run. We know how much the triathlon meant to Steve, and it was discussed at great length as to how we could make his dream come true. Now that the triathlon is going to take place we are fully committed to making it a huge success!”

There are a lot of people and organisations who are supporting the Triathlon offering their experience and expertise. Long time SPF supporters Vital Events who have vast knowledge of hosting triathlons will be giving advice and guidance. St Helens Tri Club and Be Your Best will be offering weekly Open Water Swimming Training on Monday Evenings 1830 – 2000. This will be starting on June 15th. Sweat Fitness Camps will be holding boot camps in the near future to make sure everyone who takes part has the fitness ability to complete the Triathlon.

The capacity for the St Helens Triathlon is strictly 400 participants, and Early Bird entries are available.

For more details about the Triathlon please go to www.sthelenstriathlon.com To see the route - www.plotaroute.com/route/87967 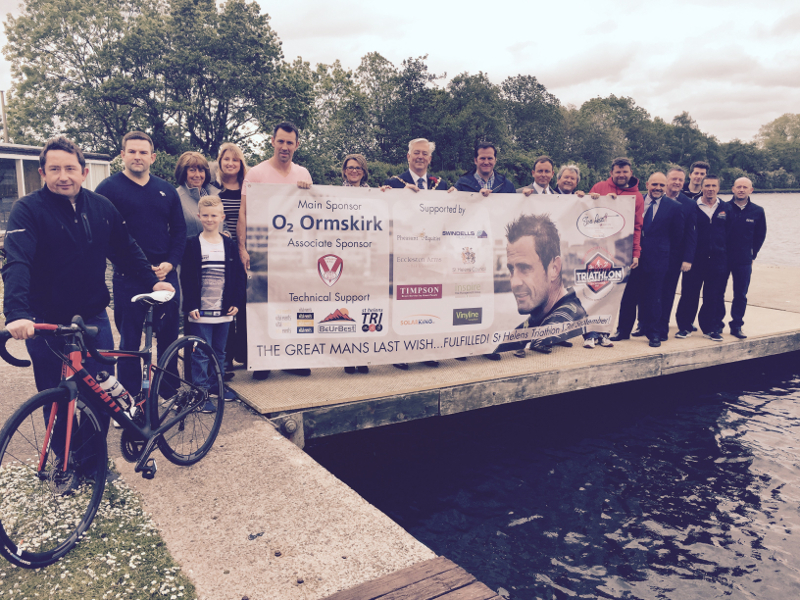