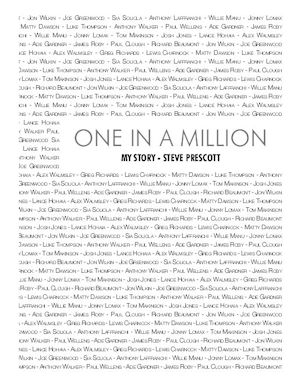 The first 500 books will be produced embossed with your name Hardbacked, embossed

In September 2006 former St Helens, Hull, Wakefield, Great Britain and Ireland rugby league full back Steve Prescott was diagnosed with cancer and given months to live. Further examinations revealed that Steve had the rare form of the disease – pseudomyxoma peritonei. It was news that would have crushed many a person but iron-willed Steve fought it with every fibre of his being and in doing so inspired the rugby league community and beyond.

In 2007 he established the Steve Prescott Foundation and undertook a series of phenomenal challenges, backed by the mantra of ‘what the mind believes the body achieves’. In doing so he motivated thousands to get active and so helped raise half a million pounds in funds for two charities close to his heart – The Christie Hospital and Try Assist. Nor did he and his wife Linzi ever give up on finding a cure for his terminal condition, culminating in a ground-breaking operation in Oxford’s eminent Churchill Hospital.

Steve wanted the world to know his story and began writing his autobiography with the help of journalist Mike Critchley in 2007 and it was completed shortly before his passing in November 2013. Linzi takes up the story for an incredible moving closing two chapters.

One In A Million is the story of Steve’s life, from being one full of colour as a top level rugby league player, to a heart-rending tale of battling cancer.

The book can be ordered online at www.spfund.co.uk

All proceeds from the sale of Steve's autobiography go to Steve Prescott's Family.