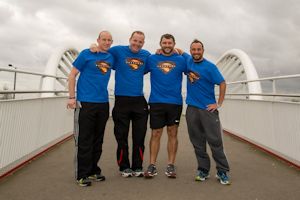 The world’s most renowned Marathon is not a stranger to Sky Sports Pundit Terry O’Connor who first completed the Marathon along with Steve Prescott in 2008, after the 26.2 mile run Terry said “It was bloody agony and absolutely knackering and a totally humbling experience, but we made it home in 4hrs 34mins. It was a superhuman effort from Steve. He actually stopped to stretch at the 21-mile mark and because I didn't want to stop, I left him behind. But I got about a mile down the road and thought I'd better go back for him, so there I was, doing the London Marathon, the wrong way! You should have seen the look on people's faces as I passed them going in the opposite direction! I reckon I must be the only person to have run the course the wrong way. Eventually we met in the middle and got going again. I also took part last year and shaved 26 mins off my race time in 2008, I beat Baz by 2hrs 59 mins so I might go back for him".

Terry O’Connor’s sparring partner and fellow Sky Sports Pundit Barrie McDermott is relishing the prospect of tackling the  challenge again. “Being an Oldham lad I am used to running uphills, hopefully this will give me the endurance to complete the 26 miles. I did it last year and loved it and I aim to beat the guy in the diver’s suit this year. Since I finished playing Rugby League I have enjoyed running it has kept me fit and in some sort of shape. I was honoured to have played alongside Precky, he will be chattering down instructions from above and take us through the pain barrier!”

Former Team Mate and recently retired Wigan, Hull FC, Hull KR & Widnes player Shaun Briscoe who makes up the “Three Musketers” of ex Rugby League players is relishing the marathon challenge. “I took part in the inaugural Walk Against Cancer in 2007. I am pleased that the Marathon is only one day not 12 days like the walk. I looked up to Steve as a player and even more so with his heroics at battling cancer. It has always been my ambition to run the London Marathon. Completing is the main aim but I must do service for the full back union and beat the two props! Steve would be happy at that result!”

BBC Radio 5 Live Presenter George “D’Artagnan” Riley is undertaking not just the Virgin London Marathon, George said “Many people now know Steve’s story, and I want to help ensure his legacy lives on, those extra  seven years saw Steve raise £500,000 for the charities represented by his Foundation. It also gave his two wonderful young boys the opportunity to see the qualities that are truly important in life. He'll be massively missed, but never, ever forgotten. My goal is to run 100 race miles in 2014, centred around a first ever crack at the Virgin London Marathon. It actually adds up to 110m at the moment! The furthest I've ever run is a half marathon!”

For further details and how you can follow the four intrepid SPF Ambassadors on their quest to conquer the Virgin London Marathon please go to www.steveprescottfoundation.co.uk